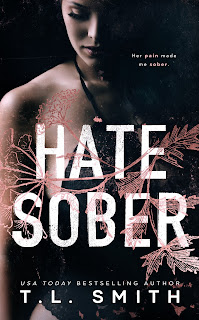 Hate Sober is the conclusion to T.L. Smith's Love Me series, and it immediately follows the events and cliffhanger ending found in the first novel in the duet, Love Drunk. A quick FYI: These two books are directly connected to each other and have a continuing story line and the same set of characters, so they MUST be read in order. Also, I'm almost a hundred percent positive I'm going to end up mentioning something in this review that could prove to be spoiler-like for those who have yet to read the first book or both books. Basically, considered yourself forewarned.

Sigh. I wish I liked this book more than I did; regrettably, I struggled far more than the main characters did. What do I mean by that? Everly and Gunner Reid are more reactionary than anything else, particularly when it came to their separation. They weren't together and they were doing their own thing as an estranged couple, so it felt as I was struggling to be emotionally connected to both of them, but they didn't seem to even want to be as invested as me in the relationship. I was hoping for more from these two, yet it was like they were twiddling their thumbs.

The idea of story as a whole was interesting, though not necessarily groundbreaking. T.L. Smith writing is noteworthy, but while the story itself was okay, I had difficulty falling in love with Everly and Gunner. Heck, I would have been okay with falling in like with at least one of them. Unfortunately, any affection I had for them was middling at best in book one, and in book two, I just wanted...something to spark between Everly and Gunner. As much as the blurb was promising, this book faltered at times in my eyes. Consequently, three stars for Hate Sober. ♥

Read my reviews for the Love Me series: