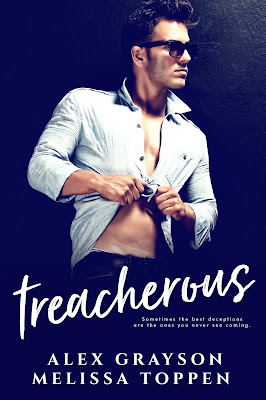 About Treacherous
Senior year was not going how I planned.
It was supposed to be an amazing year—the perfect year.
And it started out that way… until my mom remarried, and I found myself in a new town, at a new school, and living with quite possibly the most conniving person I had ever met.
But my horrible stepbrother wasn’t even the worst part.
It was his best friend.
Zayden Michaels.
Gorgeous. Unpredictable. Treacherous.
The kind of guy who sends most sane people running in the opposite direction.
He hated me from the first moment he saw me.
He made it his mission to make sure I knew it too.
I became the target—the bullied.
Until suddenly I wasn’t anymore.
But in a world of rumors, games, and deceit, you never really know who you can trust.
Sometimes the best deceptions are the ones you never see coming. 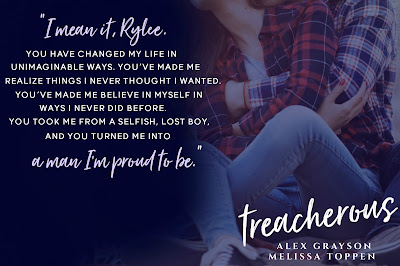 Read my five-starred review of Treacherous. 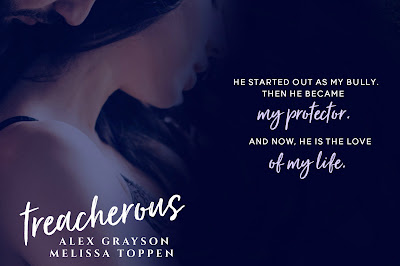 About Alex Grayson & Melissa Toppen
Alex Grayson is the bestselling author of heart pounding, emotionally gripping contemporary romances including the Jaded series, the Consumed series, and three standalone novels. Her passion for books was reignited by a gift from her sister-in-law. After spending several years as a devoted reader and blogger, Alex decided to write and independently publish her first novel in 2014 (an endeavor that took a little longer than expected). The rest, as they say, is history.

Melissa Toppen is a bestselling romance author of New Adult, Coming-of-Age, Contemporary and Romantic Suspense. She is a lover of books and enjoys nothing more than losing herself in a good novel. She has a soft spot for Romance and focuses her writing in that direction; writing what she loves to read. Melissa was born and raised in a small town in Ohio and now resides in Cincinnati with her husband and two children, where she writes full time.