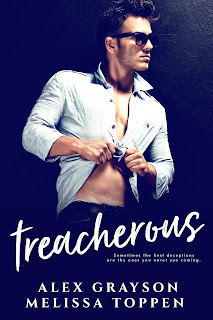 Neither Alex Grayson nor Melissa Toppen is a new-to-me author. As a matter of fact, I've enjoyed some of their past releases; however, my most recent respective friends from them weren't my favorites. With this co-authored novel, though, my faith has been restored and I was beyond impressed with how they brought their writing talents together to create such emotive story. I'm also hoping that Treacherous is the first in a new series from the Grayson-Toppen duo, especially given how curious I now find myself when it comes to at least three of the supporting cast of characters. But I digress! I'll save all my hopes and dreams for more novels later on in my review.

It's been said that the only thing that's constant in life is change, and eighteen-year-old Rylee Harper knows that firsthand. Not only has her mother remarried, but they've had to move into the home of her new stepfather. That wouldn't be so terrible if her stepbrother, Oliver Conley, hadn't made it clear that he hated Rylee and wished nothing more than for her to go away. To make matters worse, he's recruited someone to make her life a living hell: his best friend, Zayden Michaels. But there's a flare of attraction, a zing of a connection between her and Zayden. She could try keeping her head down, but she already garnered attention even before she got to school, no thanks to Oliver. Her senior year was supposed to be memorable, and now it actually is--in all the wrong and worst ways.

One of the best things about this novel is that it isn't your typical bully romance. The main bully isn't even the love interest of the one being bullied. Also, Oliver's reasons for disliking Rylee as much as he did were, to an extent, valid. Does that excuse his bullying? Of course not, but what I'm trying to point out is that this isn't one of those cases where the bullying is due to a shared past or nothing more than being reminded of someone. Rylee deserves kudos, too. She was a strong character to begin with and continued to have a firmer backbone and steadfast convictions as she evolved. Naturally, there's Zayden, and I actually like that he had to grow on me because that meant he had to prove he was worthy of Rylee and that there was more to him than being Oliver's best friend. I'm going to need more Oliver as well Charles Pierce and Savannah Reynolds, please! I'm giving Treacherous five stars. ♥