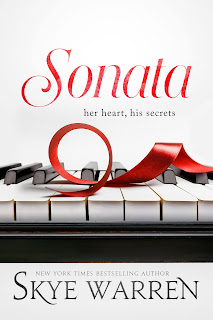 “It was never a question of loving you, Samantha. I always did that. I the right ways. In the wrong ways. In the dirty ways.” It's probably unfair that I stroke my thumb along the inside of her thigh as I speak. If it convinces her to stay with me, all the better. Her breath catches. “The only question was whether I could stop trying to sacrifice myself for you.”


I've been eager for this third and final book in the North Security series from the moment the second book ended with that evil cliffhanger. Liam North and Samantha Brooks have been through hell, but now in Sonata, they're fighting to make their way back and possibly begin living a life where he isn't her guardian and she isn't his ward. But with Liam's nightmare of a childhood alongside the things he's done in and out of the military plus Samantha's own unanswered questions about her parents and at an impasse with her future, these two have their work cut out for them. Oh, and let's not forget that someone still has their murderous sights set on Liam's beautiful prodigy.

Just a quick reminder: The books in the North Security series MUST be read in order. This has a continuing story line involving the same couple, and books one and two--Overture and Concerto, respectively--do end with cliffhangers. This also means that there could be details mentioned in this review that may be considered spoiler-like in nature, so if you've yet to dive into the series, consider yourselves forewarned. Feel free to continue...or not.

After what happened to thirty-five-year-old Liam at the end of Concerto, Samantha is understandably feeling off-center, and it's led her to part ways--with what or with whom is something I won't divulge, but it does become a point of contention between Liam and Samantha. With regards to the romance aspect, these two do get their much-deserved happily-ever-after. The sex and romance is what you'd expect from the one and only Skye Warren.

This did feel, however, somewhat...unfinished? I wanted names, or heck, even a singular name would have sufficed with regards to who was behind what was happening to Samantha. Yes, there's an appearance from someone unexpected, and while it does provide plausible motivations, it also led to new questions, i.e. is someone else after Samantha. Maybe answers await us in the spin-off, Audition, which is about Josh, Liam's younger brother, but I was expecting answers in this third book because it's all tied to Samantha. And where the heck is Elijah?! So, all things considered, Sonata was good, just not as good as its two predecessors. This third North Security read gets 3.5 stars. ♥