Review: Appeal to You by Jaclyn Quinn (Beyond the Cove #3) 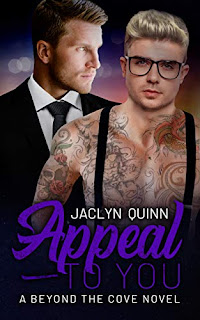 Ryder finally closed his eyes, facing Avery on the mattress. As the morning light came through Avery's window, bathing them both in its glow and waking both up, Ryder found himself completely wrapped around Avery. It took only a second to realize there was nowhere else he'd rather be.


Every time Jaclyn Quinn releases a new book, I get all giddy and anxious because this author knows how to pull me in with each story she's written and that I've read--and I've read all of the ones she's published. Her newest release is Appeal to You, book number three in her Beyond the Cove series, and it's a story that has an enemies-to-lovers feel to it. So yes, there's a whole lot of that delicious tension between two people who push each other's buttons while stoking the spark of heat that exists whenever they're around one another. There's romance and sex and a whole lot of angst (yay!) as well as bites of humor to keep this latest Jaclyn Quinn-penned novel happily balanced.

Ryder Pearce has spent the past year trying to get past Avery Hamilton's fortified walls. He's almost positive the man is as attracted to him as he is, but the stoic lawyer who looks hot in his monkey suits maintains his distance. Sure, maybe they don't have a whole lot in common. Avery practices family law in the firm he and his late best friend started while Ryder is an in-demand tattoo artist in Inkubus. Avery believes in commitment while Ryder's penchant for "nail-it-and-bail-it" with men and women isn't exactly a secret. But maybe there's a bigger reason why Avery doesn't want anything to do with him. Discovering the reason, however, will have to take a back seat when both Ryder and Avery become emotionally involved in helping an orphaned twelve-year-old kid named Chris.

Ryder and Avery are one of those couples that are supporting characters in a series but you're itching to see how their story will turn out. These two have a lot of scars from their respective pasts--both seen and unseen--and my heart broke for both of them as they tried to fully unshackle themselves from their painful experiences. I love that these two are the age that they are--Avery is thirty-six and I'm guessing Ryder is either in his late twenties or thirties--because they've done their share of living while also still trying to find firmer footing in the world that they're in and with each other. While this does work well enough as a standalone, I'm going to recommend that you read the previous books in the series in order to get certain back stories regarding recurring characters. Jaclyn Quinn's writing will make reading the three books currently available worthwhile! Five-plus stars for Appeal to You. ♥

Read my reviews for the Beyond the Cove series:

Drawn to You (book one) - five-plus stars - My Review

Thirst for You (book two) - five stars - My Review

Appeal to You (book three) - five stars - My Review (posted above)

Purchase Appeal to You on Amazon.