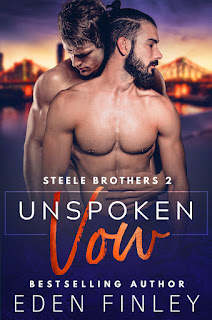 Unspoken Vow is the long-awaited second novel in Eden Finley's Steele Brothers, and while it can be read as a standalone, I'm going to go ahead and recommend that you read Lawson Steele and Reed Garvey's story first in Unwritten Law. This will help give new readers a better idea of the sort of relationship that Law had with his older brother--older by only ten minutes since, yes, they're twins and identical ones at that. Will you still be able to enjoy this new release even without having read its predecessor? Certainly but I'm advocating a more well-rounded read.

Anderson was very much dependent on Law and had been for five years, but with his brother finding love and wanting to build a home and a life with his boyfriend, Reed, Anders knew time was running out on him to stand on his own. When Reed's best friend--and ex-boyfriend--offers Anders his extra bedroom in lieu of Anders rushing to find a new apartment, Anders balks at the idea, and not just because Brody Wallace is a temptation he'd rather avoid. Anders sees himself as a mess, and he doesn't want to drag Brody into it. The hot lawyer is up for the challenge that is the the accountant who's rejected his advances before, but can Brody accept Anders's dark past?

This book has a darker and heavier feel to it compared to the first one, but even with all the angst, the bites of humor are there, sharp as they may be at times, which I'm quite a fan of. Anders has been through hell and back, and it's easy to understand why he's as wary of being around Brody as he's been. It takes them spending time together for Anders to see that Brody truly is someone he can put his trust in, but again, trauma like Anders's isn't the sort that's forgotten and managing his anxieties are easier said than done. I did love how patient and supportive Brody was and Anders's progress and growth was quite inspiring. We also see where Law and Reed are at in their relationship. Suffice it to say that there are happily-ever-afters twice over. Five stars go to Unspoken Vow. ♥