Review: Race You by Jolie Vines 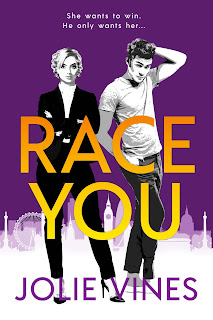 My introduction to new-to-me author Jolie Vines was by way of her new release, an enemies-to-lovers romance entitled Race You. Set in an office in London, this funny bit of fiction is all about Emma Worthington and Barnabas Montrose, although he uses the name "Arnie" while working in the same company as Emma--and yes, he has his reasons. They push each other's time and again, which has become the norm for the two of them for as long as they've been in the same office. However, Emma has been having dirty dreams about Arnie and she has no clue that he's been crushing on her for the longest time. But then they end up on the same team competing with other teams for a dream promotion. The catch? Only one member of the winning team can be promoted. The open position is one Emma's wanted for so long, but she knows all too well that Arnie is the front runner, what with the boss being all chummy with him. They may need to work together, but she can't help him to the point that he may end up taking the promotion from her. The race is on, but while Emma's racing to the top, Arnie is racing to heart.

This was an entertaining and lighthearted read with a fair amount of spark and chemistry between the main characters. I quite liked both Emma and Arnie and their banter was loads of fun to read through. A lot of the romance stories that has the main characters working in the same office tend to be more of an employer-employee-sort of setup, and one of my favorite things about Jolie Vines's take on the trope was that Emma and Arnie were basically peers, so there isn't this whole idea of power and such. These two had a good connection and they made for the sort of couple that you enjoy getting to know whilst they get over their issues and make their way to their happily-ever-after. This book also happens to have a nice cast of supporting characters, and I loved seeing a number of them getting their own HEAs as well. I'd be hard-pressed to pinpoint much of anything that I didn't like about Race You, and while it may have been my first read from this author. It won't be the last. 4.5 stars. ♥

Purchase Race You on Amazon.