Review: The Other Side by Kim Holden 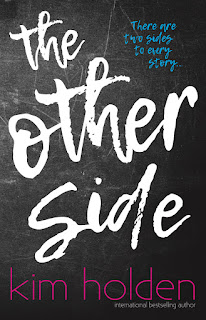 The words, the feel and the sound of them, make me shiver. The kind of shiver that begins down deep in the pit of my being and spreads like adrenaline-based lust through my veins. This. Girl. I close my eyes, carve out my black heart, and bare it for her to see, feel, and hear. It's absolutely terrifying.

I wish I believed I was competent enough to come up with the appropriate string of words to aptly express how much this story moved me. I've come across Kim Holden's name and her past work on both Goodreads and e-retailers, but her writing was something I had never experienced myself...until a couple of days ago. The Other Side is a standalone young adult (YA) novel and it's the latest published work from Holden, and it is, without a doubt, one of the most compelling reads of any genre that I've had the distinct privilege of reading in recent memory. The author doesn't try to push her main character down the reader's throat, insisting that this individual should be equally pitied and adored. Instead she introduces him to us in the manner in which he wishes, and then, as the current events in his life play out and we glimpse snippets of his past, we get to know both the boy and the young man behind the mask he shows the world. It isn't pity that I felt for seventeen-year-old Toby Page; it was empathy and understanding, and that the realization that the introduction of eighteen-year-old Alice Eliot is a game changer.

The Other Side is, by no means, an easy book to read nor is it easy to come up with a review for it. Toby Page's story is as complicated as he is multi-layered. This is the sort of story that I feel is best experienced without overthinking the blurb that goes with it. Basically, what I'm saying is to go in blind, although reading blurb isn't exactly something that will either make or break the reading experience, at least that's what I believe. I do think, however, that this needs to come with a trigger warning, particularly with regards to suicide and suicidal thoughts. Toby's life isn't one that consists of childhood memories that will warm his heart when he thinks of them. Yes, he has some, but those are few and far between and mainly consist of him with his older sister, Nina. But see, Nina's gone, and for the past two years, he's had no family and no longer has friends. He has people--from his landlord, Johnny, and Johnny's nephew, Cliff, both of whom share an apartment with Toby, as well as the other residents in the Victorian along Clarkson Street--but his interactions with them are limited at best. And then Alice Eliot comes along and everything shifts, but is it enough to change the trajectory of Toby's life and ultimately, his one end goal?

The storyteller here is mainly Toby. (There's another first-person viewpoint in the book, but I'll let you "meet" them for yourselves when you read the book--and you should read it as soon as humanly possible.) From the moment we meet him, he makes it known that he's an asshole, but his actions belie throughout that label he's slapped on himself. I wouldn't exactly say that he's misunderstood; after all, he presents a certain version of himself to people, valiantly--and usually successfully so--hoping that they'll want to keep their distance from him. He can't afford attachments, and that makes him even more of a curious character. He was sharing his story--the good, the bad, and the ugly--and I couldn't help but root for him. I'm pretty sure he would have scoffed at the idea, but I'd like to think that there was the hidden part of him that craved even a modicum of positive attention and affection. Again, he'd probably deny it. Toby's easily become one of the most unforgettable main characters I've come across and the cast of peripheral characters surrounding him were wonderfully notable, too. Well, minus his mother; you'll see why when you read the book. Kim Holden's writing is intoxicating, and even though Toby's tale was fraught with heartbreak, its foundation was one of honesty and hope. The Other Side gets five-plus stars times ten. ♥

Purchase The Other Side on Amazon.