Review: I've Got You by Becca Seymour 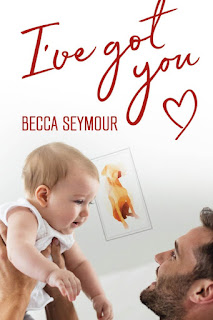 I've Got You is the companion novel to Becca Seymour's previous release, Let Me Show You, and while both books can be read as standalones, the couples in both books play major roles in each other's lives. So yeah, I'm going to recommend you read Let Me Show You, which is the story of Carter Falon and Tanner Grady (and Rex the Rhodesian Ridgeback), followed by I've Got You, which is the story of Scott Anderson and Davis Jackson (and baby Libby, Davis's daughter), Carter's former nemesis and Tanner's best friend, respectively. Both are low on angst, so if you're looking for some lighthearted M/M romance fare, these are a couple of good picks, but if you'll allow me to play favorites, I confess that it's the latter and more recent novel that took me by surprise and totally won me over.

Fair warning: I may inadvertently mention a detail or two in this review that could turn out to be spoiler-like for those out there who have yet to read Let Me Show You. Now that I've got that part of the way, I've Got You is basically about a veterinarian whose perceived homophobic behavior alienated him from the new town he moved to as well as the veterinary practice that his godfather entrusted him to oversee and a coffee shop owner trying to balance life as a single parent and a single man. Thirty-two-year-old Scott Anderson's life may have finally imploded and now he's still at a loss as to what happens next, especially now that he's now openly acknowledged his sexuality. In thirty-five-year-old Davis Jackson, he finds not only a friend but someone he could even have a future with, but while Scott may be receiving support and acceptance from others, it's time for him to accept himself first.

My previous read from Becca Seymour was pretty good and I liked Carter and Tanner's story, but it's this more recent read that's left a bigger impression on me. Seymour's writing felt smoother here, with an easier flow and pace compared to its predecessor. There was also more depth to Davis's and Scott's respective back stories, albeit more from the latter than the former, as well as their romance and relationship. Carter and Tanner are a constant presence here, but not enough to steal the spotlight, instead highlighting that family isn't limited to just the blood ties but the ties that we create with others. Overall, I've Got You was a well-written read, and I'm giving it 4.5 stars. ♥