Review: All In: Iggy's Story by Sidney Halston (Worth the Fight / Panic Crossover #1) 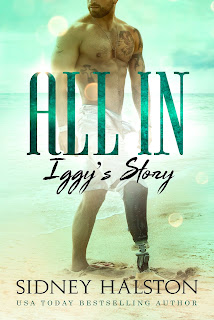 Date: An advanced reader copy (ARC) was provided by the author.

My introduction to Sidney Halston's writing came by way of her highly popular Worth the Fight series, and my love affair with her writing continued with both her Panic and Iron Clad Security series. Now, she's got what I believe is the first in a new crossover series, and no, it isn't limited to just Worth the Fight and Panic universes but including the Iron Clad Security world as well. Maybe just call the series "Crossover"? But I digress. All In: Iggy's Story is all about a side character named Charles Iglesias, aka Charlie but more known as Iggy, from previous books. Fans of the other series will recognize Iggy, and while this new book can be read as a standalone, knowledge of the characters from the other series, particularly the guys from WtF gym, makes for a more well-rounded experience.

Twenty years ago, Charles Iglesias was the new kid in school and Abigail Williams was the girl with the stutter and they not only became the best of friends but also became more than friends and shared a number of firsts in their lives. They made plans for the future, and then Iggy disappeared, leaving Abby utterly heartbroken. It's been fifteen years since then, and the last thing Iggy expected was to get a phone call from a man telling him contacting him about an Abigail Jones. In need of someone to protect not just her but her two children, Oscar and Liliana, from dangerous elements, Iggy decides to leave Miami and return to their hometown of Tarpon Springs, Florida. The reception he receives from the girl he loved is cool at best, but as much as Abby pushes him away, Iggy intends to stay for as long as she and her kids need him. He's hoping she won't let him leave because he needs them, too.

All In was a sweet and sexy second-chance romance that brought a smile to my face courtesy of not only the cameo appearances from familiar characters in past Sidney Halston-penned books but also with how satisfying an overall read this was. When it comes to this particular trope, my personal preference has always been to not get back together right away, aka let the other person work for it, and not just because you want to punish them or teach them a lesson. This has a lot to do with rebuilding the foundation of their relationship, a foundation that's been cracked by what led to them going their separate ways. Iggy wasn't a bad guy, even if I didn't agree with what he did fifteen years ago; Abby was justified in her hurt and anger and I appreciated that she didn't wallow in guilt over her late husband, Aiden. The kids were adorable and this book gets bonus points for the addition of the dogs. I loved the balance of romance and suspense and I can't wait for more from this new series. 4.5 stars for book one! ♥