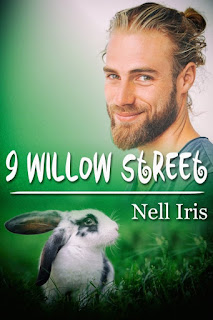 Awww! Nell Iris's 9 Willow Street was short but sweet and very much what I needed after having read far heavier and more angst-ridden reads as of late. I'd never read a story involving a rabbit shifter before, so my curiosity definitely had me itching for this novella from the moment I glimpsed the blurb. Here we have twenty-six-year-old Hannes Viklund, who upon learning that his beloved great-grandmother had left him her house on 9 Willow Street, immediately begins to make it his home. Almost everything is as he expected it to be, including the garden that he hopes to tend in his Nana's honor, but there's an unexpected visitor his very first day in the house: a white rabbit with black markings, who has no qualms making himself at home. Growing attached to the furry creature, Hannes names it "Mio" and becomes used to having the highly personable bunny around constantly. So, imagine his shock when instead of a bunny, Hannes finds himself face to face with a very human man named Mattis Nyman, two years his junior who claims to be a rabbit shifter. The two share a strong bond but will it survive family objections?

This story put a smile on my face, and it was all thanks to Nell Iris's adorable take on the whole shifter romance trope. I'm sure there are more "cutesy" shifters out there, but this was the first one that had crossed my tablet, and having been more accustomed to shifters that have a more "hunter" vibe to them--i.e. wolves, tigers, bears, etc.--this felt fresh and different. I appreciated the pacing of the story and that it took some time before Mattis revealed himself in human form to Hannes, allowing for the two of them to form an attachment. I also liked the element of being mated, which is a staple in this particular trope, but with the author giving it her own original touch. Low on angst and high on entertainment and romance, I relished all things 9 Willow Street. It gets 4.5 stars. ♥