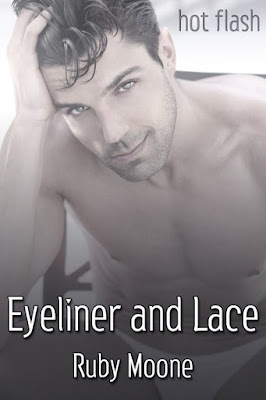 About Eyeliner and Lace
The day Ryan Fulton realises he’s in love with Jamie Holt is the day he knows he’s losing him. With blue-tinted white blond hair, eyeliner, and a personality to match, Ryan knows he’s a bit much. But can he change? Can he tone it down and, if he does, can he live like that? He’d never suspect Jamie of cheating, but maybe his closeted boyfriend decided flamboyant Ryan wasn’t worth the effort.

But Ryan isn’t going to take it lying down. Determined to win Jamie back, Ryan even decides to get rid of the black and blue lace undies he just bought.

Then Jamie comes home and says they need to talk.

Read my -starred review of Eyeliner and Lace.

Add Eyeliner and Lace on Goodreads.

An Excerpt from Eyeliner and Lace
An hour or so later, the door slammed, and there was Jamie. He looked tired. His tie was loosened, and the top button of his white shirt undone. Rain curled the ends of his dark hair. They’d been living together for two months now, and it still made Ryan’s chest feel all achy when Jamie came home from work and smiled as though he was happy just to see him.

Jamie shrugged wearily out of his jacket and hung it up, then, when he spotted Ryan, his face just lit. Just as it always did. “Hey, you.”

Jamie held out his arms, and Ryan walked into them. They held each other tight, and Ryan kissed Jamie’s jaw. He was shorter than Jamie, skinnier, so he fit perfectly into his arms. He gave the best hugs. Hard, but warm and safe. All the craziness melted away when Jamie held him. Maybe things weren’t as bad as he thought.

Jamie nuzzled his neck and made a soft humming sound. “What’s for dessert?”

Ryan pulled back and smiled up at him. “Wait and see.” He gave him a suggestive wink, patted his backside, and set off for the kitchen with a swish. He glanced back to see Jamie checking his phone. When he noticed Ryan watching, he slid it into his pocket.

“Who was that?” Ryan tried to keep his voice normal. He opened the fridge door and concentrated on pulling salad things out rather than look at him.

Ryan’s chest hurt. He paused and closed his eyes for a second before speaking again. Making sure his voice was even.

“Do you want to shower before dinner?” he organised the food on the counter.

“Yeah. Why not.” Jamie stood behind Ryan, pulled down the neck of his T-shirt, and nibbled the nape of his neck sending shivers all over him as always. “Won’t be long.” He squeezed Ryan’s arse cheek and headed for the bathroom.

Ryan tapped the cucumber against his lips for a moment, they shoved all the salad stuff back in the fridge.

He gave Ryan chance to get into the shower, then ran up to the bedroom, stripped off, and followed him. The shower had been Jamie’s idea. A walk-in affair, definitely big enough for two. He watched Ryan. He was so beautiful it was hard to breathe. He had his back to him as he rubbed soapy bubbles over his chest, under his arms, around his neck. Muscles rippled across his back, and his backside clenched when he soaped further south. Ryan’s mouth went dry.

My name is Ruby Moone and I love books. All kinds of books. My weakness is for romance, and that can be any kind, but I am particularly fond of historical and paranormal. I decided to write gay romance after reading some fantastic books and falling in love with the genre, so am really thrilled to have my work published here. The day job takes up a lot of my time, but every other spare moment finds me writing or reading.

I live in the north west of England with my husband who thinks that I live in two worlds. The real world and in the world in my head...he probably has a point!