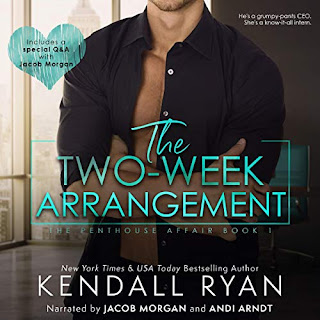 The Two-Week Arrangement is the first book in the Penthouse Affair duet from bestselling author Kendall Ryan, and from the sex to the romance along with a heavy dose of intrigue, the story ticked off a lot of my wants and needs. Dominic was the uber rich hotelier whose love for making the best deals is unmatched by his devotion to his twin girls, Lacey and Emilia. When he meets Presley Harper and then goes on to mentor her, it becomes obvious that his intern his both beauty and a brain. Asking her to become his "plus one" is necessary if he hopes to win over his latest potential business partner. It's nothing more than a simple arrangement for the next two weeks--a means to an end and every one wins--until everything becomes complicated.

Kendall Ryan did a really good job concocting this story, and while it does end in one heck of a cliffhanger, can I just say that I was thankful I had the second audiobook ready and waiting for me so as not to experience any anxiety? The narration from Jacob Morgan and Andi Arndt was spot-on, with this being the first time I've had these two particular narrators team up together for an audiobook. They're both among my favorite voice-over talents, and it's now become obvious that they work quite well together. I'd give 4.5 stars for the story and five stars for the performance, so I'm rounding off the overall rating to five stars for The Two-Week Arrangement. ♥