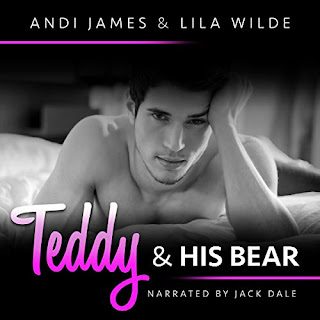 Note: The audiobook was provided by the authors via LesCourt Audio Review Team.

Teddy & His Bear is the first audiobook in the Oh My! series penned by the writing duo of Andi James and Lila Wilde and narrated by Jack Dale. This is an M/M romance with an age-play kink to it between Teddy, who is twenty-four, and Barrett, who is forty-two. After being dumped by his two boyfriends--no, not in two separate relationships but as part of a throuple--Teddy finds himself brokenhearted and at a loss. Barrett knows what it's like to be abandoned by the person he loved most, what with his ex leaving him years ago. When Barrett offers Teddy the garage apartment at his home, the two find themselves becoming closer, but is this the beginning of nothing more than a special friendship or could it be something far more? However, Barrett refuses to even entertain the idea of Teddy being a potential "boy", but will he change his mind when he finds out that Teddy would love nothing more than to have Barrett be his "Daddy"?

This was a good story, one that developed in a manner that had the two main characters truly setting firmer groundwork for the relationship that was to follow. It also allowed me to get to know Barrett and Teddy much better. I loved Barrett's protective and nurturing nature. He truly did seem to be an ideal partner for Teddy. On the other hand, the younger man was sweet and equally protective of Barrett, but there were moments where Teddy did seem to have far more naivete than I would expect for someone his age. It was almost as if he was in "boy" mode all the time. Still, I was happily entertained by the story that Andi James and Lila Wilde put together, and it served as a good starting point for the Oh My! series. Jack Dale is a new-to-me narrator, but I was impressed with his effort on this audiobook, creating enough nuances to distinguish one character from another while also setting the tone for the story. I'm giving Teddy & His Bear four stars. ♥

Purchase Teddy & His Bear on Audible.