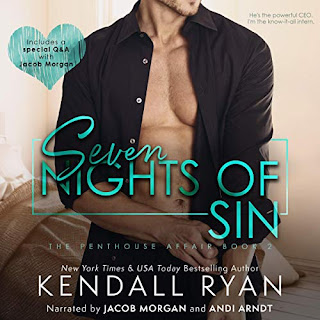 Seven Nights of Sin is the second book in the Penthouse Affair duet and Kendall Ryan gives Presley Harper and Dominic Aspen's story a much-deserved happily-ever-after but not before they have to confront issues with trust and communication. This audiobook MUST be listened to AFTER The Two-Week Arrangement because they are directly connected to one another,with this second book continuing the story from the first book. In order to save listeners who have yet to listen to the first audiobook from any potential spoilers, I'll keep the details as basic as possible. Dominic Aspen is a billionaire hotelier and single father to twin daughters and Presley Harper is his intern turned lover. Yep, I'm leaving it at that. You'll have to listen to The Two-Week Arrangement and then Seven Nights of Sin and fully immerse yourself in all things Dominic and Presley.

I appreciated how Kendall Ryan handled the whole brouhaha between Dominic and Presley, and while I knew they were going to have their happy ending, they did have their struggles before getting there, as it should be. I feel this then becomes a far more rewarding ending for everyone concerned. Jacob Morgan and Andi Arndt continued that level of excellence that they brought to the first audiobook. These two really did do justice to the strong story the author created. As was the case with The Two-Week Arrangement audiobook, Seven Nights of Sin gets 4.5 stars for the story and five stars for the dual performance, so a rounded-off five stars for this great listen! ♥