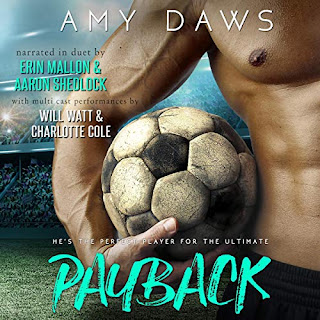 Payback is a spin-off story in the Harris Brothers universe, but it's got a wholly different feel compared to the books involving the Harris siblings while still bringing with it that Amy Daws touch of humor and heart. I loved the story when I read it as an eBook, and listening to it made for such a fantastic experience as well. Roan DeWalt and Allie Harris had one of the most original beginnings I've ever read, and while the attraction between them was palpable from the get-go, but it was, after all, just meant to be a one-night stand, at least that's how Allie had it all planned out...as well as a few other details she kept from Roan. But life has its share of surprises for these two, and everything becomes REALLY complicated when secrets come to light in the most humiliating of ways. The originality and development of both the story and characters made this such a fabulous book to fall in love with, and makes it easy to add it to my list of 2019 favorites.

I loved the idea of a multi-cast narration for this audiobook, especially with Will Watt and Charlotte Cole reprising their "roles" from the Harris siblings' audiobooks, allowing Aaron Shedlock and Erin Mallon to step in as new voices for these new main characters. Erin Mallon is very much the Erin Mallon listeners are familiar with, and she did a good job bringing Allie to life. I've listened to Aaron Shedlock's work in the past, and he's always been such a remarkable narrator, but I confess that his South African accent here gave me pause. It didn't have the nuances that I've come to expect from the accent, which I've heard several times already in the past, both in real life and in films. It veered more towards a British accent at times, and had Roan not already been identified as being South African, I would have swooned over Shedlock's accent here. Watt and Cole were the highlight of this audiobook, doing a bang-up job of narrating not just a couple of voices but several of them!

Overall, Amy Daws made me fall in love all over again with her story and Aaron Shedlock and Erin Mallon did well enough with Will Matt and Charlotte Cole stealing the show. All things considered, I'm giving the Payback audiobook an average of 4.5 stars. ♥

Learn more about Will Watt and Charlotte Cole.