Review: Working Out the Kinks by Misha Horne 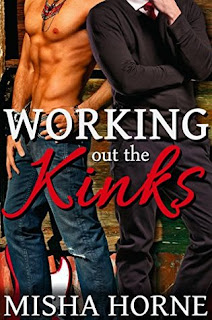 Misha Horne was a new-to-me author prior to me reading Working Out the Kinks, a super angsty story about two former stepbrothers whose paths cross once again. Landon is cynical and doesn't believe in love, no thanks to having a ringside seat to his mother go from man to man and using them for what they could offer her financially and materially. Life isn't fantastic but he makes do with rocking out in a dive bar. He doesn't have much need for much else. And then Brett re-enters his life. Brett is spoiled and cocksure and could have anything and anyone else. So it doesn't make much sense to Lan why, out of everyone else in the world, Brett has his sights set on him.

It took me a good, long while to get my thoughts together to write a review for this book. There were parts of it that I liked--the tension, the sex, and Brett--and it certainly had a sense of promise to it, what with an enticing blurb and all. But goodness, Lan was an absolute party pooper. Grumpy doesn't even begin to describe how much he seemed to revel in his own angst. Sure, Brett wasn't perfect, but his outlook on life wasn't as morose as Lan's. There was also a whole lot of internalizing that Lan wallowed in, to the point that I wanted to shake him. But even with me not being a fan of Lan's as an individual, I did like him when he was with Brett, weirdly enough. So while the book did have its issues, it did turn out to be a fairly entertaining read. 3.5 stars go to Working Out the Kinks!

Purchase Working Out the Kinks on Amazon.