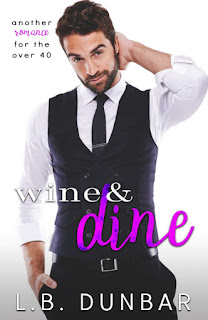 Wine & Dine is the newest release from L.B. Dunbar and it's part of the Sexy Silver Foxes series. This also serves as a direct companion novel to the fourth book in the aforementioned series, Second Chance, which is about Denton Chance, who is the younger brother of Dolores Chance, the heroine of this latest Dunbar novel. After the passing of their mother, forty-seven-year-old Dolores is in a limbo of sorts. Her beloved diner looks worn and tattered, but she doesn't have extra funds to give it the makeover it deserves. She misses her mother but hasn't fully come to grips with what exactly it is she lost. The return of her estranged brother has him insisting she leave town for a while and allow him to take care of things with their grandmother and the diner. Going to California to live in Denton's beachfront condo for a few weeks sounds like a good thing, but while he did kinda-sorta-maybe say something about his neighbor, Dolores never quite expected the greeting she did from said neighbor's overly friendly dog--and a wet one at that. She also never to fall for fifty-year-old investment firm owner Garrett Fox. But Dolores is done being everyone else's last pick and she isn't sure someone like Garrett will be able to put her first.

One of my favorite things about this particular series from L.B. Dunbar is the age group the main characters belong to. I love that, just like the first four couples before them, Garrett and Dolores are older, Garrett being fifty and Dolores about three years younger. I'm in my mid-forties, and while I'm not picky when it comes to the ages of the characters I read about, I adore the forty-something set is as well represented as it is with these books. Garrett and Dolores's love story has a lot of humor, but it also has its fair share of angst. While Garrett may seem like the guy who has it all and relishes his single status, but his back story makes it clear how he's become the person that he is, both the good and, well, not exactly bad but more of falling under "needs work". Dolores's angst is more on the surface, so its more easily recognized, but that doesn't diminish it either. So, with their respective back stories plus the whole being on opposite coasts and neither having really been in committed relationships in decades, Dolores and Garrett's romance becomes complicated, but seeing how these two become stronger versions of themselves once they're together makes their journey to happily-ever-after even more worthwhile. 4.5 stars for Wine & Dine. ♥