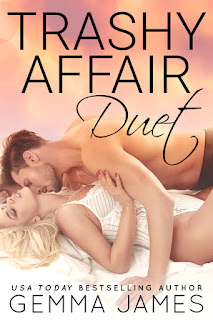 I was surprised to come across Gemma James's Trashy Affair Duet for free on Amazon a few days ago, and I was certainly not going to let the opportunity pass me by, so I snagged this immediately and I'm glad I did. I knew going into it that this was a story about extramarital affairs. Yes, you read that right--affairs--as in plural. The author makes this clear from the get-go via the blurb for the book by noting what the main theme of the book is, so there's simply no way that a reader can say, "I didn't know that it was about an affair!" The title basically puts that out there and, well, that's what the blurb is for, although I do get about going in blind and such since I've done that many times in the past. That being said, cheating isn't a hard limit for me reading-wise, so had I gone into this duet blind, the subject matter wouldn't have been an issue. So consider this your trigger warning: cheating does occur.

The Trashy Affair Duet is composed of two books: Trashy Foreplay and Trashy Conquest. Readers are immediately introduced to a twenty-two-year-old young woman named Julia Harley and she's not only lost the man she loves but a job she actually liked all because of a drunken encounter with her boss--her very married boss. She decides to leave everything behind and hops on a plane headed to Seattle to be with her best friend. It's on that very same flight where Jules's life is about to shift once again. She meets Cash Montgomery, a man who draws her in like a moth to a flame. They share an inexplicable bond that seems to go beyond physical attraction, but once the flight arrives in Seattle, they go their separate ways--she to start over and he to confront someone for betraying him. But fate is a funny thing because Jules and Cash meet again: he's her new boss at the job she just landed. What's worse is that she learns that the man she hasn't stopped thinking about since he sat beside her on the plane has a wife.

There's a whole lot of cheating that goes on in this duet, and it's not just Cash and Jules who happen to be guilty of it. I don't want to make excuses for these two in particular. Yes, Cash's wife is cheating on him but he is still married to her and he happens to still be in love with her even as he discovers her deception. Then there's Jules who knows all about cheating as well, having cheated on her longtime boyfriend with her married boss. Sure, they were on a break, but that didn't work out so well for Rachel and Ross on Friends either. So, obviously things are already complicated for Cash and Jules even before they become involved, more so when they actually do start their affair. While I don't condone cheating in any form--physical or emotional or whatever--this is a work of fiction, and what I will say is that there's more to their affair than it being about getting back at a cheating spouse or sex. Both Cash and Jules were flawed people, as was the case with a whole lot of other characters here, but Trashy Affair Duet is a story about love and redemption and it IS about more than merely cheating. Nicely done, Gemma James. 4.5 stars. ♥