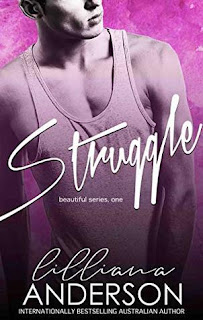 It's never a struggle to read one of Lilliana Anderson's books, and the fact that I didn't read her Beautiful series when it was originally released a few years ago, I was thrilled to have the opportunity to read the new series starter, which is basically A Beautiful Struggle and Too Close repackaged together to what is now Struggle. We're introduced to Katrina Mahoney and David Taylor, best friends for years and ONLY best friends. While Trina has had feelings for David for quite a while, David never fails to remind her in one way or another just how important of a friend she is. Trina knows there's no hope for more with David, and she most certainly doesn't want to be yet another female on his long list of women he's been with for nothing more than a romp between the sheets. It's time to move on, and maybe working at a law firm and having a connection with the junior solicitor named Elliot Roberts. The firm, however, has a no-dating policy, forcing Trina and David to keep their status under wraps, a fact that doesn't sit well with the very protective David. But is David really just protective of Trina or could it be more?

Ah, I love it when a triangle involving a female torn between two males doesn't have any villains. Both David and Elliot are good guys. Sure, neither one is perfect, but they do have genuine feelings for Trina, which is why the title for this book seriously fits. The struggle was real for Trina, but then it was real for David and for Elliot, as well. I wouldn't necessarily say that I was on either Team David or Team Elliot. If anything, I was on Team Trina because this girl really needed a man who would love and support her wholeheartedly and be proud to show the rest of the world just how much. Sure, that could have easily been David from the get-go, especially if he had just been a wee bit more open about how he actually felt about her. There would be so many more relationships that go from platonic to romantic without too much of angst of the two people involved learned to talk more, but hey, they do make for some interesting fodder for romance readers like me. The "novella" part of this book is more of a prequel but told from David's POV, so it was so eye-opening. Again, Lilliana Anderson has a winner with Struggle. Five stars. ♥