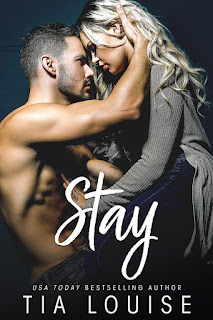 It's been a good, long while since I last read something by Tia Louise (not counting her co-written work with Ilsa Madden-Mills), and Stay was the perfect re-introduction to her solo writing. This was a fantastic second-chance love stories that had an enemies-to-lovers feel to it--hey, rejection will make almost anyone go from loving you to hating you--and it's got a couple of strong main characters who have share an undeniably strong pull to each other.

Ten years ago, Stephen Hastings and Emma Barton shared an incredible night together, but he was leaving for the Navy and couldn't offer her anything more. Now, Stephen is back and finding Emmy working at a dry cleaner's and divorced from a major douchebag who cheated on her, leaving Emmy a single mother to a seven-year-old son named Elijah with epilepsy is surprise. As much as she makes it clear just how much she hates him, he wants nothing more than to help her and Eli. Emmy says he isn't her hero, and he doesn't want to be; what Stephen does want, is to be her husband, knowing it will be the best way to help her. But will she stay when their contract ends?

Well now, consider Stephen Hastings the newest inductee to my Book Boyfriend Hall of Fame because this man went above and beyond for the woman who owned his heart. That doesn't mean, however, that Emmy was nothing more than the woman he had feelings for. Nope, she was every bit as fierce and independent as I had hoped she would be. She wasn't looking for a hero, but she got one anyway, and I loved that while she would have preferred to do things on her own and not rely on the guy who broke her heart a decade ago, she loved her son beyond measure and knew when to resist and when to accept assistance. These two simply clicked and their story had that fine balance of angst and lightheartedness that I appreciate in my romance reads. I was wholly invested in Stephen and Emmy's (and Eli's, too!) happily-ever-after and what a journey to an HEA it turned out to be. 4.5 stars! ♥