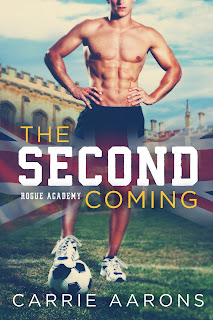 We all know just how popular the sport of football is in countless countries around the world--this is not to be confused with American football, but rather the one a minority of places choose to call "soccer". Well, sports romances are a highly popular trope as well, and football--okay, yes, both kinds--happens to be one of the more popular sports featured in said romances. Carrie Aarons is certainly no stranger to the trope and football being the sport of choice, what with Red Card, which was originally released back in 2016, ranked as her most popular book on Goodreads. And now, she's got a new series, a spin-off of sorts to Red Card, but Rogue Academy is standing on its own merits. By the look of things based on the very first novel, The Second Coming, it's off to an amazing start.

The Rogue Football Academy in the small English town of Clavering is considered the breeding ground for the most promising of future football stars, but when it comes to the newest generation, no one even comes close to the level of attention that twenty-year-old Jude Davies has received. He's known as the "second coming" of English football--the player who'll win championships for the professional Rogue Football Club and bring the World Cup back to England. But for all of Jude's gift for playing the sport, he seems to have a bit of a problem containing his less than stellar reputation off the pitch. He's been warned time and again to get his act together, but Jude knows just how good he is and how much he's needed by the club. It takes a whole lot for someone to put him in his place--there's Rogue FC's manager, the academy's coach, and now, a blonde beauty who sings like an angel named Aria Lloyd. The nineteen-year-old has no time for Jude's shenanigans, but the chase is on, and Jude refuses to lose.

This book got off to a good start and it kept getting better and better the more the chapters flew by. And that was the thing, I never even realized a couple or so hours had passed by the time I had finished reading. No breaks, no distractions. I was already interested from the get-go but I was totally invested in the story the moment Jude and Aria had their rather, umm, memorable first meeting. I loved how there was a push and pull with these two, and that Aria had no qualms speaking her mind and letting Jude know that she was no pushover. On the surface, Jude was the hellraiser who was the future of English football and Aria was the rule-follower who did what was necessary in order to keep her life in order. But these two had a lot more in common, what with their respective families and all, although they did, indeed, balance each other out--Aria bringing order to the chaos in Jude's life and Jude enticing her to let loose and encouraging her to follow her dreams. Fans of Red Card are also in for a treat, but you'll have to read this new book to find out what it is. I'm giving The Second Coming five stars, and with the way Carrie Aarons has set things up for the next couple in the series, I can't wait to get my hands on book two! ♥

Purchase The Second Coming on Amazon.