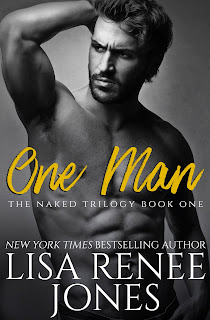 If anyone knows how to merge intrigue and suspense with romance and sex, it's Lisa Renee Jones. She's got a new trilogy entitled Naked, and she's launching it with One Man, introducing readers to thirty-four-year-old Jax North and twenty-eight-year-old Emma Knight, he the head of the family-owned North Whiskey and she the sister of the new head of Knight Hotels. Their initial interaction during a moment of vulnerability on her part leads to an unforgettable encounter full of intensity and heat. It was supposed to be a lone moment in time, but neither Jax nor Emma can deny that it sparked an undeniable craving for more because once could never be enough--not after what they experienced together. Discovering her late father's secrets in his private journal have Emma feeling wary and distrustful, so she keeps her secrets, unsure of who she can trust. As they grow closer, however, she bares herself, piece by piece, to Jax, and it's as if their coming together was kismet. Soon, though, Emma discovers that she's not the only one with a cache of secrets and that her meeting Jax was more meant to be than she'd realized.

First things first: Yes, this series starter does end in a cliffhanger and the sequel is slated for a September release. If you're familiar with Lisa Renee Jones's writing, particularly when it comes to series that feature just one couple, then finding a cliffhanger at the end of the first book shouldn't be all that surprising. Something else that shouldn't be surprising are all the twists you'll find here. I swear, Jones knows how to keep her readers on their proverbial toes. Just when you think you have an idea of what's going on, something is revealed and you find yourself sitting with your e-reader in your hands wondering how you could've missed it. I loved how Jax and Emma seemed to have this invisible thread that was constantly drawing them together, and while Jax had his reasons for wanting Emma in the beginning, there was no denying how palpable the chemistry between them was from the get-go. Now, like I mentioned earlier, there's a cliffhanger ending and we've got about three months to wait for book two. As anxious as I may be to get answers, I'm confident Jones will make the wait worthwhile. Five stars for One Man. ♥