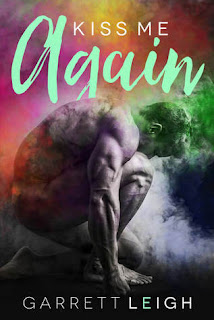 From the jagged white line on my jaw to the neat surgical scars on my ankles, I see him putting together every mark on my body, adding them into a sum I've never attempted. I wonder what answer he's looking for and if...when he finds it, the way he looks at me will change.

Faith tells me it won't.

Fear tells me it surely will.

There's always been something about Garrett Leigh's writing that calls to me. Her stories and characters have never failed to tug at my heartstrings. It would be simple enough to say that it's because I'm addicted to angst in the books I read, but this had everything to do with Leigh's gift for weaving these stories that get to me because it's simply impossible to not feel anything for the main characters and the tales they have to share with readers. With her latest release, Kiss Me Again, Leigh once again has penned a romance that is more than just about two people who fall in love--it's about two people who find themselves and each other and endure through challenges that aren't simply solved or gotten through. After I'd read this moving love story, I wanted to read it all over again.

Twenty-six-year-old Aidan Drummond doesn't really give any fucks about anything or anyone and don't expect him to make apologies for it either. Well, maybe the trees--he cares about those, which is a good thing given that he's a tree doctor and all, and it's while he's up taking care of one of those trees that he ends up in an accident that lands him in intensive care with massive injuries. It's there that he meets twenty-five-year-old Ludovico Giordano, a man whose touch feels like magic. The fact that someone actually makes him feel something has him dumbstruck. There's something about Ludo that fascinates him, but there's clearly more to Ludo than his willingness to listen to Aidan bemoan his current situation. He's in the hospital for a reason, and when they both end up discharged, the possibility of them meeting again is close to nil...but not impossible. After all, Buckbourne isn't that big of a town...

Ah, this book had all the feels! I loved Aidan's and Ludo's development as individual characters as much as I did the evolution of their relationship from strangers being in the same hospital ward to friends and then lovers. There's so much more to Garrett Leigh's romances, than just a meet-cute that turns into a romance that is complicated by conflict, and then wrapped all neatly with a bow in the form of a happily-ever-after. Just like those before them, Aidan and Ludo wanted me to jump into my tablet and take care of them. These two were complex and multi-layered men who had a lot to deal with, and while they're doing well enough on their own, it's when they're finally together again that everything seems to start clicking into place. I'm not saying that it's easy nor simple. Nothing in life usually is, but it's the fighting for their relationship--for that wanting to be present with each other in order to have a future--that gets me. Every. Single. Time. Gah! Leigh's done it again with Kiss Me Again--and if you're a Skins series fan, consider the namedrop in here an added bonus. I'm giving this highly recommended read five-plus stars. ♥

Purchase Kiss Me Again on Amazon.