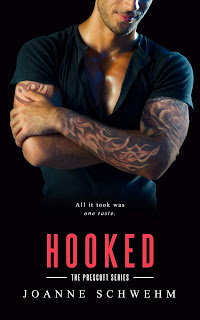 I can't believe Hooked is my first-ever read from Joanne Schwehm! Sad but true, and it's the fifth in a series, so I was being wishy-washy about reading it because I tend to be a stickler for reading books in a series in order. However, I took a chance anyway--yeah, I know that we're often told a book can be read as a standalone anyway, but I still feel that reading all of them in order will make for a better overall reading experience--and I'm happy to say that I'm glad I did. This fifth Prescott novel did read pretty well as a standalone, and I am sooooo going to make up for my lapse and catch up on the rest of the series and the author's other books as soon as humanly possible!

Twenty-five-year-old Joshua Prescott is loving his life. He's got a restaurant called Prism that's the talk of the town, fulfilling his dream of sharing the food he creates with an eager (and paying!) public. He has everything he wants, but you know that saying about having everything and then some? Well, Josh's "and then some" came in the form of a twenty-two-year-old woman with a head full of curls and the rest of her body filled with klutziness galore. Oh, and Gia Russo just happens to be the new pastry chef his brother hired for Prism. Josh fears she's a disaster waiting to happen, but when he gets a taste of her goods, erm, goodies, umm, BAKED items, there's no denying that Gia was born to bake. Another thing Josh can't quite deny? The hot mess he once called "Unicorn Girl" has him feeling hot and bothered. Josh and Gia are a pair to behold in the kitchen, but could there be hope for them outside of it?

I absolutely enjoyed this romantic comedy read! After a slew of heavier reads, this was exactly what I needed (and then some!). I loved Josh and Gia together, and the gentle matchmaking slash prodding from Josh's family certainly made for some entertaining snippets. There was a whole lot of smiling and snickering on my end courtesy of the shenanigans that were going on plus some honest-to-goodness sweet moments that had me sighing contentedly. Since I'm currently stuck in bed because I'm not feeling well, this book proved that laughter--by way of a fantastically well-written rom-com--is the best medicine indeed. I know I've got a heck of a lot of catching up to do with regards to Joanne Schwehm's back list, but I can only hope they're as fab as this one. Five stars go to Hooked. ♥