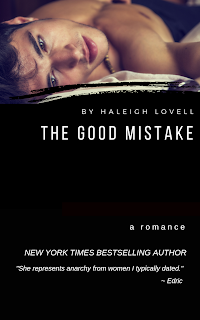 Note: A review copy was provided by the author via Enticing Journey Book Promotions.

It's been a year since I last read The Foreplay, the second novel from Haleigh Lovell's Hemsworth Brothers series, but the wait's been worth it because Edricson Hemsworth's long awaited story was a hoot and a half with some serious feels to boot. The Good Mistake is a romantic comedy read using the fake relationship trope but as always, Lovell adds her own stamp to this quirky story. Edric's book can pretty much be read as a standalone, but I'm seriously recommending the first two novels--The Slam and The Foreplay, both of which are about Edric's brother, Ender--be read as well because of several recurring characters and simply because I think they're really fab reads.

I've been itching for this book ever since that snippet at the end of The Foreplay, and while I admit I was kind of hoping Edric was going to be paired up with someone else, I was more than okay with the woman he did end up sharing his story with: Lucy Jane Lawless. These two were nothing like Ender and Adelaide, and that's a good thing because who the heck wants regurgitated couplings and story lines? Edric and Lucy were in a class all their own, and while I tend to be nitpicky when it comes to tales of fake relationships that later have those involved wishing it were real, their romance was the sort that had me laughing out loud and shaking my head at all the antics of the characters involved. However, there was also a point in the story were the tone felt heavier, and me being the angst addict that I am appreciated that because it didn't feel like it was thrown in just for empathy or extra drama.

When I read The Good Mistake, I was at a really low point, having lost my beloved cat the day before, and let's just say that Edric and Lucy helped brighten my spirits for the three or so hours I spent reading their book. Maybe the same thing would have happened with another book, but I already know what to expect when it comes to Haleigh Lovell's writing, particularly when it comes to this series, and she--and this book!--did not disappoint. I love romance in general, but I have affinity for stories that are above the norm and Edric and Lucy's story was exactly that. Lovell brings on the heat as much as she does the heartfelt moments in the midst of all that humor, and while I've missed this author's writing, she never fails to make the "reunion" worthwhile. Five stars for The Good Mistake. ♥

Read my reviews for the Hemsworth Brothers series:

The Slam (book one) - five stars - My Review

Purchase The Good Mistake on Amazon.