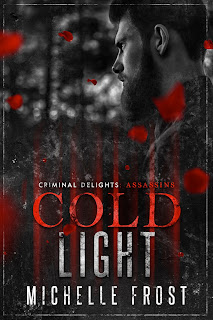 Anyone who knows me well knows that I don't like reading a book series out of order or reading the latest book in an ongoing series without having read the previously released books. Which is why it may seem strange that here I am, reviewing the fourteenth book in a multi-authored series that has yet to end. Two words: Michelle Frost. Yep, all it took was for me to see that Michelle Frost was the author and there was simply no way I was going to miss the chance to read Cold Light, which is book number fourteen in the Criminal Delights series, falling under the Assassins subject matter. And I'm happy to report that this book can be read as a standalone, so if you've yet to read the rest of the books in the series but want to read Frost's, go ahead, jump in, and relish her criminal delights.

When Lexington Campbell finished his final assignment as an assassin, he had only one thing on his mind before he'd have to make his way back to Sand Lake and finally take his place as part of the Iron Heretics MC--the same club and chapter that his father was president of--and that was to spend time with his boy. It was three years ago that Lex first caught glimpse of Arden Zanetti dancing center stage at Spritz, and after two years of drop-in visits with Arden, Lex finally decided to ensure that no one else would get to be with his boy but him. Maybe the time's come to make their relationship what it's felt like for so long: a committed one. But when gunmen arrive, Lex suspects a contract has been put on his head, and he needs to protect Arden and get answers before it's too late.

I guessed the twist in the story early on, but I honestly didn't give a hoot if I turned out to be right or not. Nope, this was all about the pleasure of reading a well-written romantic suspense story with the most intriguing cast of characters I've come across in a long time--and I'm talking about ALL the characters. Lex and Arden were it for me. These two had chemistry that was off the charts, but I was on board for the tension and wariness that was in play after the would-be gunmen tried to kill them because it made it feel more realistic to me. I loved the action and suspense, and hello, the romance and sex were fantastic. The ending was absolutely on-point, and now, I really hope that this is just the beginning of a new series about the Iron Heretics MC from Michelle Frost because I seriously need more of these tales in my life. No rush; I'll be waiting. Five stars for Cold Light. Go and read it ASAP. ♥