Book Spotlight: The Earl Next Door by Amelia Grey 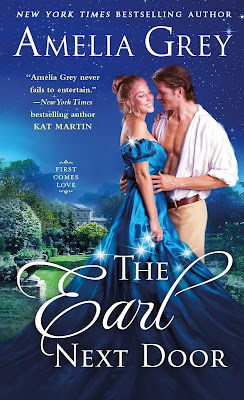 About The Earl Next Door
What does a fiercely independent young widow really want? One determined suitor is about to find out…

When Adeline, Dowager Countess of Wake, learns of her husband’s sudden death, she realizes she’s free. At last, she can do, go, and be as she pleases. Finally, she can have the life she has always dreamed of. She doesn’t need, or want, to remarry. Especially not the supremely dashing future Marquis of Marksworth, who makes Adeline yearn for his desire…

Lord Lyonwood, son of a philandering marquis, will not be like his father. He wants to run his estates and watch them flourish—and find a wife who brings love to his life. When he meets spirited and self-reliant Adeline in a case of near-scandalous mistaken identity, Lyon feels he’s met his match. But Adeline isn’t interested in a marriage proposal. She will only accept becoming his lover—and Lyon finds it hard to refuse. Unless the fire of his passion can melt Adeline’s resolve…

Add The Earl Next Door on Goodreads.

An Excerpt from The Earl Next Door
Perhaps he should have stated who he was when he first entered the drawing room, but he’d thought it wasn’t necessary. He was only too well aware of how many private pleasure houses were hidden among the cozy streets of respectable London and how easily and quietly they were established. He’d certainly availed himself of more than a few over the years, which was why he’d promised his aunt he’d deal with the one she believed was moving in next door to him and down the street from her.

Lyon could now see that Lady Wake’s earlier perplexed expressions and her sense of outrage had flashed warning after warning, which he’d ignored. That the countess didn’t immediately engage him with welcoming smiles should have been a swift indication all wasn’t as it seemed, but he was already in an irritable state of mind when he arrived at her house and unwavering in his thoughts not to be persuaded from his mission by a tempting woman.

He’d returned home from a laborious meeting with his unprepared solicitor, wanting only to get ready for an evening at White’s so he could get caught up on the latest news and indulge in a game or two of billiards, a few hands of cards, and an expensive bottle of brandy. Instead, he’d come home to find his aunt in his drawing room wringing her hands in misery over the possibility of unmentionable women setting up a forbidden business in their quiet neighborhood. And insisting he must do something about it at once.

Given all that was put before him, including the countess’s attire, what else could he have possibly done other than assume she was a paid woman preparing to fulfill some lucky man’s fantasy for the evening?

“The mistake was mine. I thought this was the kind of house where a man is always free and welcome to come and go as he pleases without hindrance, and not have to reveal his name or wait around to be announced. If I had known you were a lady and not an angel of the evening, I wouldn’t have acted so freely.”

“An angel of the evening?” She puffed out a breath of exasperation. “What rubbish. Clever words or phrases won’t hide what you thought when you entered or how you spoke to me. Now that you know who I am, you are still free to speak to me as before.”

That she would suggest he continue to speak so openly with her surprised him and was downright refreshing. Most of the ladies he knew would have fainted when he made the remark about paying her fee for the evening and pray to never hear such a vile comment again.

“Nevertheless, I will give you the respect you deserve and watch my language now that I do know, my lady.”

He watched her breathing ease and calmness settle over her as they each assessed the situation. That her recovery was quick and solid was a testament to her strength.

“I heard you were out of Town when I moved into the neighborhood a few days ago,” she continued in a calm and confident voice.

“That doesn’t absolve your actions tonight. You should have checked with someone before you came charging over with uncivil actions, assumptions and untrue allegations.”

Lyon’s jaw clenched tighter. No doubt about that. He should have questioned his aunt more about her suspicions, but he wasn’t about to explain that to the countess and implicate his aunt and her friend. “I was reasonably certain I had good cause to act as I did.”

“And earl or not, sir,” she added valiantly, “you are an ogre as I’ve found most of your ilk are.”

He couldn’t argue with that either.

“Before you go, I’d like to know what made you think this was a house of pleasure for men.”

Lyon shook his head slowly. She was unbelievable. Asking him to explain what she’d just slapped him for. He wasn’t going to get caught in that snare again. “I’d rather not say, my lady.”

“Of course you don’t want to, but you must. I need to know what caused you to act as you did. Others could make the same mistake.”

Something settled in Lyon’s chest. A feeling that he’d never had before. Lady Wake was no shy or simpering female. She was courageous, impassioned beyond belief, and probably too strong-willed for her own good.

That intrigued him. It made him want to answer her with candid freedom, but every fiber of his being as a gentleman warned against such talk with a proper lady.

Yet, after only a brief hesitation, he responded, “If you insist.”

“It was brought to my attention that there have been some peculiar things going on over here while I’ve been out of Town.”

“Peculiar?” Concern resurfaced in her expression. “What do you mean? There is no reason for us to stand on ceremony, my lord. We are quite familiar with each other now. Speak to me as you would a madam and tell me what made you think my home was a house of ill repute.”

“Very well. An abundance of deliveries of bed-chamber furniture going into the building behind this house.”

“Why would that be strange, sir?” she asked him crisply. “Beds are necessary for everyone.”

“And women coming and going at all hours of the day and night.”

“Ah, yes,” she said on a breathy sigh as the meaning of his words became clear to her and she relaxed once again. “Now I understand. Beds and women. What else is a man to think of other than pleasure?”

Lyon felt the only thing he could reasonably do at this point was lift his brows, and say, “For that I can offer no apology.”

“It’s true, there have been many beds delivered. The building behind this house is being furnished as a boarding school for girls, my lord. The women who have been seen coming and going will be their tutors. Currently, some of the women have different jobs they must return to each day. They are free to leave at whatever time they deem necessary to make their other duties and commitments.”

“A boarding school?” he repeated, wondering why the hell his aunt didn’t know that. She was usually one of the first to hear the latest gossip.

“Yes. So whatever tawdry vision you’d imagined would be taking place between these walls tonight or any other won’t be happening. My home is not what you thought it was, and anyone else who assumed the same will have to look elsewhere for his decadences.”

The countess opened the door for him.

Lyon felt his expression softening, his admiration growing. For a number of reasons, including the truth of her words, there was no repairing their inauspicious meeting.

He nodded without further words, turned, and walked out of her house.

New York Times and USA Today bestselling author Amelia Grey read her first romance book when she was thirteen and she’s been a devoted reader of love stories ever since. Her awards include the Booksellers Best, Aspen Gold, and the Golden Quill. Writing as Gloria Dale Skinner, she won the coveted Romantic Times Award for Love and Laughter and the prestigious Maggie Award. Her books have sold to many countries in Europe, Indonesia, Turkey, Russia, and most recently to Japan. Several of her books have also been featured in Doubleday and Rhapsody Book Clubs.

Amelia is the author of over twenty-five books. She’s been happily married to her high school sweetheart for over thirty-five years and she lives on the beautiful gulf coast of Northwest Florida.