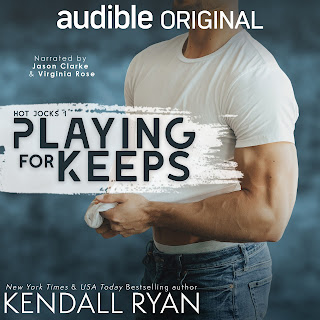 Note: The audiobook was provided by Audible.

Put together Kendall Ryan's writing and the combined narration of Jason Clarke and Virginia Rose, and you've got a fantastic read  about a star pro hockey player and his best friend's younger sister in a secret relationship with all the feels. Playing for Keeps is the first in the author's new Hot Jocks series and it's an Audible Original, meaning the audiobook was released in advance of any eBook or paperback, both of which are slated for release in early August. This is six and a half hours long, but with an audiobook that had this much of an entertaining story that unfolds, it felt as if time had simply flown by really quickly.

Justin Brady is twenty-eight and is on hiatus when it comes to his usual MO of sleeping around with the puck bunny of his choice. His life is all about hockey, but after his team wins the championship and everyone gets to partying hard, Justin wakes up the following day and finds Elise Parrish, who is twenty-three AND his teammate slash best friend's sister. The two pretend to not remember what happened the night before, but both are haunted by memories and the undeniable desire to hook up again...and again...and again, or at least until the itch that started has been completely scratched. A friends-with-benefits arrangement will spare them both any broken hearts, but that goes out the window when feelings begin to surface.

Both Justin and Elise were already secretly pining for each other years before they hooked up for the first time, but they were already aware early on how complicated things were going to be, especially since Owen Parrish was Elise's older brother and Justin's best friend and teammate. There's the whole "bro code" to consider, but Justin also has issues when it comes to trusting and his family. This was super easy to listen to, and Jason Clarke and Virginia Rose made for a great pair of voices, both conveying the right tone and emotions for each of their chapters. Playing for Keeps easily receives five stars, and it's left me excited to listen to more from the series, especially since the second book is about Owen and Elise's best friend! Squee! ♥

Purchase Playing for Keeps on Audible.