Review: Lessons in Lemonade by Kathryn Andrews (Starving for Southern #3) 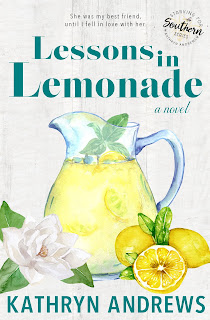 "I want you and me, together, forever."

"Forever can be a long time."

Sitting up so my feet are now hanging over the edge of the bed, I reach for her and drag her back over so she's standing between my legs. Running my hands up her hamstrings, I squeeze her tiny little ass before I settle them on her waist. She's looking down at me as I look up at her, and she sees that I mean it when I say, "Forever will never be long enough."


There's just something about this series that hits the spot. I love books that combine humor and angst and an author like Kathryn Andrews has shown she knows how to strike a balance between the two without ever forgetting the heart and heat. Every book in her Starving for Southern series has been downright charming without overdoing it, and she closes the series out with the best in the bunch, and that's saying something because the first two novels, The Sweetness of Life and Last Slice of Pie, were wonderful reads, but Lessons in Lemonade is a humdinger of a closing note (or at least it feels like it!) to this endearing and beautiful small-town romance trilogy.

Meg Dukette is all about living her best life. She's a chef and restaurateur, she's surrounded by an amazing and supportive group of people who love her, and she's doing it all in the only place she'll ever call home: Charlestion, South Carolina. Everything is in harmony--that is, until Jack Willette becomes her game changer. He is, hands down, one of the best in professional football, and just like cooking is her passion, playing football is the one thing he's been wholly devoted to. When everything comes to a devastating halt, it's Meg that Jack turns to--the woman who's become his best friend. With Jack needing time to wrap his head around decisions that have to be made, he spends most of that time with Meg. He wants more than she's willing to offer, but Jack is making a play--for Meg.

I adored Jack and Meg! These two had my heart from the moment their paths crossed, and it was clear that the connection was there. They went from strangers who happened to share mutual friends to friends themselves, with Jack laying claim to the "best friend" title and slapping it on Meg as well. The banter had me grinning and it was obvious from the get-go that there was more to them than platonic vibes. As expected, Kathryn Andrews had that perfect mix of lighthearted fare to heavier feels, and I have nary a complaint to make. She's done this so darn well in every book of hers that I've read, so naturally, I was expecting the same; instead, I got that and more. The pacing of the storytelling was top-notch, and the development of Jack and Meg's relationship was never rushed. While this is a standalone, I highly recommend this fab series as a whole. Five-plus stars for Lessons in Lemonade. ♥

Read my reviews for the Starving for Southern series:

The Sweetness of Life (book one) - five stars - My Review

Purchase Lessons in Lemonade on Amazon.