Review: Shots on Goal by Amy Aislin (Stick Side #3) 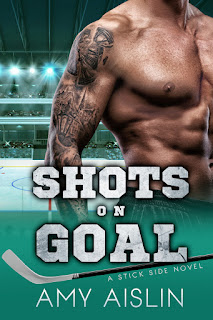 Shots on Goal is the third novel in Amy Aislin's Stick Side hockey romance, and while you can read each of the books as standalones, I feel like you'll get a better overall reading experience if you read the series in order (like I did!) because of the recurring characters. This new book is about twenty-five-year-old hockey player Roman Kinsey and twenty-one-year-old psych major Cody Evans. Roman's traded to the Vermont Trailblazers, a newly formed team. He knows staying on task and making sure that the Trailblazers indeed blaze a trail of wins and a fan following, but he unexpectedly finds himself distracted by Cody, the bespectacled cutie who considers the local library a passion project of his. However, Cody's rather passionate for the crush he's forming on the hot hockey player who volunteers as a storyteller to the young patrons of the library. The more time Roman and Cody spend together, the more smitten they become with each other, but can anything truly flourish between the two of them when Roman is keeping his sexuality a secret? What happens when Roman's past makes an unavoidable return?

Set in 2011, the story begins with a heartrending prologue that introduces a life-changing series of incidents in Roman's life eight years prior. Because of everything that happened to him at seventeen, it's pretty easy to figure out why he's as guarded as he is at twenty-five. There's a wariness and stoicism to him that belies just how good of a heart he has, which comes to the forefront when he volunteers at the library and when he steps up as a leader on his new team. I think that he needed someone like Cody in his life--someone who became like a beacon, bringing such light, love, and laughter to Roman. I adored these two together, although there was a period of time wherein Roman may have panicked a wee bit and acted like a jackass. Amy Aislin deserves kudos because she could have gone down a path where Roman's past would have wreaked havoc and there would have been all this unnecessary angst; instead, a different kind of revelation came about! I totally loved it. Now, I'm not sure if Shots on Goal is the final book given that two new couples are already together, but either way, this was a 4.5-star read. ♥