Review: Wonder with Me by Kristen Proby (With Me in Seattle #12.5) 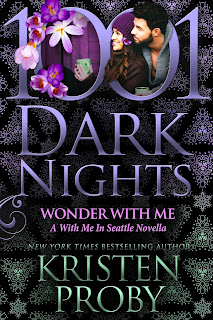 Kristen Proby takes fans and readers back to the series that launched her writing career and made her the beloved author she is today with a new holiday romance. Wonder with Me is the latest novella in the With Me in Seattle series but can pretty much be read as a standalone. I've read majority of the books in the series, but may have missed the most recent two or three stories. However, I was still able to easily slip into this new one and I enjoyed myself rather nicely, thank you very much. If you're new to Proby, this is as good a place for an introduction as any.

Wonder with Me is the story of Reed Taylor, a man who, at thirty, lives a great life, thanks to the continuing success of his co-owned multi-million business. Everything changes when a social worker shows up at his office with a four-year-old girl in tow--a little girl who turns out to be the daughter he never knew about. Now, all Reed wants is to make sure Piper's first Christmas without her late mom is the best it can be. This is where twenty-nine-year-old interior designer Noel Thompson steps in. She's exactly what Reed and Piper's home needs--and their hearts, too.

This was a sweet holiday read, and one that was surprisingly steamier than I'd expected. I don't know why I was surprised since I'm already very much familiar with this author's work, but don't take that as a bad thing. I liked the balance of Reed finding his footing as a first-time father and Noel trying to figure out if she can cross the line between Reed being a client and his wanting to date her, plus Piper was adorable! The story developed at a fast clip, and there was a feeling of insta-love here, but when you know, you know, right? 4.5 stars for Wonder with Me. ♥

Purchase Wonder with Me on Amazon.