Review: The Lineup by Meghan Quinn 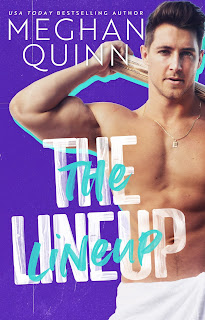 Meghan Quinn brings us back to her world of baseball with the third novel in her unnamed series! The Lineup is the story of Jason Orson and Dorothy Domico, and while stories one thru three were mostly set in college, this one is set post-college, as in years afterwards. If you're familiar with this particular series of books, then you'll get what I'm saying when this takes place after the end of The Locker Room, unlike The Dugout, which took place during book one but ends prior to its conclusion. (And let's not count Holt's Story, which was part of the multi-authored Team Player 2, since it was basically the first few chapters of what will later be a full-length novel, one that Quinn said would be released after The Lineup.) Confused? Well, don't worry. Whether or not you've read the other books, Jason and Dottie's book can be read as a standalone, as is the case with all the others, but there are several recurring characters, what with them being connected as teammates and friends, so maybe read them all anyway?

Jason Orson isn't quite sure what to think of the woman who donated a whole lot of money to his charity, The Lineup. Dorothy Domico claims that it was an accident and that she actually had no intention of making use of the date that she had won because of said donation. The date being with Jason, of course, whom she knew back in college. Now, it all seems to be a likely story, but then Jason finds out that Dottie may have had a wee bit of a crush on him back then--which translates to her having a honking huge thing for the guy. In spite of their shared friendships, Jason had no clue who Dottie was until very recently. She may say she doesn't want to go out on a date with him, but Jason intends to make sure that the date pushes through. Could this be the start of something good?

This was such a great read, one that enjoyed from start to finish. It was chock-full of everything that I've come to expect from Meghan Quinn--her quirky brand of humor, heart, and heat plus a pinch of angst to keep readers like me on our toes. Jason and Dottie seemed like opposites, but his pursuit of her wasn't something out of sport. I loved the connection they shared, and their relationship was super sweet and they were simply endearing. Now, Knox Gentry and Carson Stone were difficult acts to follow, but Jason Orson more than kept up. I swear, he was just such a great guy, and he was THIS close to knocking Knox off top spot (but he's STILL holding on!). How Dottie held off for as long as she did surprised me because Jason was a sweetheart and a half. Maybe I should dub him The Woo Master. The Lineup lived up to my lofty expectations and gets 4.5 stars, but now I need more from this world! ♥

Purchase The Lineup on Amazon.