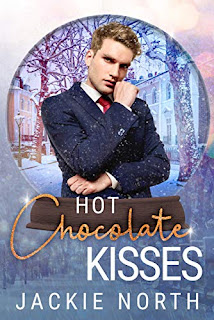 I love Jackie North's Love Across Time series, so I was curious to see what a holiday romance from her would be like. I've yet to read her previous holiday story, The Christmas Knife, so this newest one was something I was looking forward to. Hot Chocolate Kisses is the ninth book in the multi-authored Snow Globe Christmas collection but it reads exceptionally well as a standalone considering I've yet to read any of the other books in the series. I'm guessing that the threads that connect all of the stories are the snow globes and the Christmas season.

Short but sweet, Hot Chocolate Kisses is the story of two seemingly opposite men. Alex had no choice but to leave behind his unsavory life in Chicago, Illinois and moves to the small town of Harlin, Colorado to be closer to his sister and brother-in-law. His first interaction with Cory isn't exactly a good one, and neither is the next time they see each other. With Cory taking a break after attaining his graduate degree and ending his relationship with his boyfriend, the last thing he expects is to be drawn to the hulking man that is Cory. Maybe this is the start of a new friendship that could very well to something more, if only both men can set aside all their insecurities and doubts.

Alex and Cory's story gets off to a slow start, but once it gets over the bump that is their not-so-great initial impressions of one another, I loved it. They were different and there wasn't this immediate click between them, but I loved seeing their relationship evolve from strangers who made assumptions about each other to tentative friends who have an underlying attraction and then far more. They also had a solid group of supporting characters around them, which I quite liked, although I may have been giving Sheriff Reed the evil eye when he did what he did to Alex. Grrr! The whole thing to do with the snow globe was such a great turning point for Alex and Cory, and I adored these two and how they worked their way to their happily-ever-after. Four stars go to Hot Chocolate Kisses. ♥