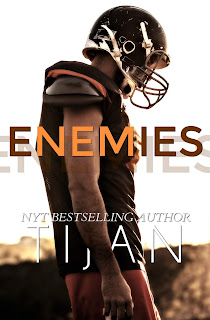 “I will.” He sank down on a chair in the corner, toeing the curtains out of the way so he could see outside his window, and there he held me. “Tomorrow we can go back to hating each other.”

So the rest of the night, he cradled me.

The rest of the night, I cried.

The rest of the night, we didn't hate each other.

Is it really fair for Tijan to release five novels this year, and each one happens to land on my list of favorite reads of the year and whittling that list down to a top...whatever (I haven't made up my mind on what the final number will be)...is causing me anxiety because I feel like all five need to be a part of it?! This is what happens when an author is THIS gifted, but it's a good "problem" to have compared to the alternative. Her latest published novel is a standalone with a whole set of new characters--a couple I fell truly, madly, deeply in love with, some I was smitten with and hoped we'll get to know more (which basically means I hope Tijan writes books about them), and nearly the rest I quite liked. The story itself had all that wonderfully addictive angst that I cannot get enough of, but this isn't drama for the sake of drama. Enemies is a story about best friends who became the worst of enemies, but when one of them loses almost all of the little they had left, Dusty Phillips and Stone Reeves become something in between...that is, until they become something more. Curious? Enticed? Whichever it may be, just read this book!

There's a line from William Shakespeare's play The Tempest that goes, "Misery acquaints a man with strange bedfellows," and that's what the main characters of Tijan's Enemies end up becoming. As children, Dusty Phillips and Stone Reeves were each other's closest friend, but they would go their separate ways, with the awkwardness that comes with awareness of certain things. Years would pass until the frayed ties that bound Dusty and Stone would finally be cut, because this time around, it was no longer "just" about their extinct friendship--it was about one family betrayed by the other, and one massive loss in Dusty's young life left her not just bereft but abandoned by the boy who had become part of her home. When she ends up transferring to Texas C&B in her junior year, she has no friends and is barely making do with a closet-sized room in a house where it's made clear that she's the outsider who isn't up to par. And Stone? He's everywhere, but that's what happens when the boy she grew up with then grew to hate is a professional football player for the Texas Kingfishers and considered a god down in Texas. Stone hates Dusty with equal passion, but when tragedy strikes her yet again, it's her enemy who holds her close.

Tension, tension, all that delicious tension! This beautiful story about love and friendship and forgiveness and reconciliation has my heart. Dusty and Stone's history is very much mired in a slew of conflicting and confusing thoughts, feelings, and situations, with a lot of the last one not even of their own doing. There's a great deal of bickering between these two, and it isn't difficult to see that there's a great deal of hurt and pain that continues to linger. However, it's in their quieter moments where I felt I could bear witness to how much deeper their relationship has always been and how the roots of that relationship were actually still very much entrenched in spite of everything that they had gone through. Both Dusty and Stone inspired a myriad of emotions out of me--frustration, inspiration, excitement, amusement, etcetera. Ultimately, though, it was contentment because after all the challenges that these two had to live with and live through, they came out of it stronger, wiser, and more open to anything and everything that would come their way knowing that they were absolutely better together than apart. As much as I gush about Dusty and Stone, I need to acknowledge the fantastic cast of characters that surround them and I sincerely hope we haven't heard the last from them. Enemies is a five-plus-starred must-read. ♥