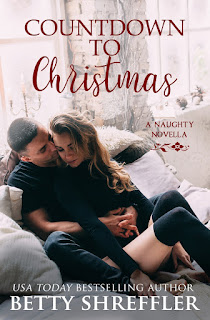 Countdown to Christmas is a holiday romance with a touch of office romance novella penned by Betty Shreffler. When Sophia Ward and Jaxson Parker first met, there was an obvious attraction between them, one that they acknowledged with a whole lot of flirting. But when Sophia sees him with someone else, she immediately places Jaxson in the friend zone, and there he stays over the next three years. They become the closest of friends, so when Jaxson ends up needing to move and Sophia happens to need a roommate, them sharing an apartment would be a no-brainer. Right? When their boss inserts himself, not only does Sophia end up inviting Jaxson to be her roomie, her boss throws a bet into the mix. He'll double her Christmas bonus if she and Jaxson don't have sex within the first ten days together. That shouldn't be too difficult. After all, she and Jaxson are just friends. Maybe?

This was a short read that was equal parts sweet and steamy. One of my favorite things about it was that Sophia and Jaxson already had an established friendship, so there wasn't all this time wasted on rushing their relationship forward from friends to lovers. Because it is a novella, the quick pace was something that I was already expecting, and while there were indeed times where it felt like it was too fast forward, I think that the idea of these two coming to grips to what they'd been feeling for each other and deciding on whether or not to act on said feelings wasn't what I'd consider instantaneous. Sophia and Jaxson were likable main characters, and the story that the author tells is an easy-to-read romance that's just in time for the holidays. Four stars for Countdown to Christmas. ♥

Purchase Countdown to Christmas on Amazon.