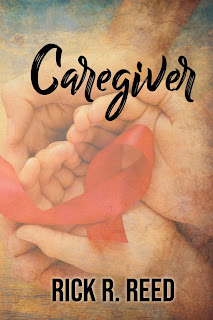 "Why should I believe that?"

"You don't have to. It's your choice. We've gotten to know each other. I think you have a pretty good idea of who I am. You can believe or not. Nothing I say beyond what I just told you is really going to make a difference. It's all about faith. Trust. What you feel right here." Dan touched Sullivan's chest, just above his heart.

Dan turned and began to walk away.

Originally published in 2011, Rick R. Reed has re-released his award-winning novel about a thirty-year-old man whose life changes in more ways than one when he moves from Chicago, Illinois to Tampa, Florida. I'd first read Caregiver in September of 2017, and not only was I eager to revisit this heartrending yet hopeful story, it seems fitting for the author to independently publish and release it in the month of December, which is World AIDS Month. I live in a country where HIV (Human Immunodeficiency Virus) and AIDS (Acute Immunodeficiency Syndrome) may not be a highly prevalent compared to other nations, but it is also the country with the fastest growing number of new cases, according to the Joint United Nations Program on HIV and AIDS (UNAIDS). While most of this story is set in 1991, it's one that remains as timely as ever, and one that I so encourage others to read.

Dan Calzolaio moves to Florida with his boyfriend, Mark, in hopes of them living a life together free of Mark's addictions and partying ways. Dan decides to join the Tampa AIDS Alliance Buddy Program, and is soon paired with Adam Schmidt. The twenty-six-year-old may be diagnosed with AIDS but he isn't spending whatever remaining time he has left wallowing in misery. He's loud and proud and doesn't care who knows it. Dan and Adam form a strong bond, and while they may have started out as "buddies" foisted upon each other, theirs is a kinship that both men grow to treasure. However, it's his connection to Adam's boyfriend, Sullivan O'Connor, that gives Dan pause. He knows thinking of Sullivan as anything other than as Adam's is wrong, but when the inevitable happens and Adam passes away, will Dan and Sullivan ever consider exploring their connection or will guilt eventually win?

Caregiver isn't a comprehensive history of any of the characters' lives; instead, what we have is a period of time where the life of the central character, Dan, is tied to those of the peripheral characters, Adam, Sullivan, and Mark, and how everything changes for all four of them in varying degrees and ways. This novel gave me pause and made me both take stock of my personal convictions and feelings. There were several moments where I couldn't help but shed tears for these characters and what they were experiencing. This isn't your run-of-the mill romance. It brings together complex subjects like HIV and AIDS, addiction, death, acceptance, redemption, loss, and love, but ultimately, I see this story as individuals on a journey with paths that converge for a time before later either diverging or merging. I considered Caregiver a must-read in 2017; and I stand by that two years on. Five-plus stars. ♥