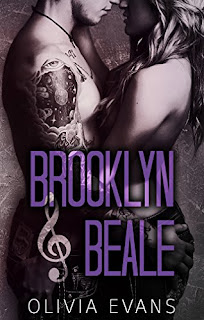 Chloe Bennett is what's known as a session musician. She goes where she's needed, never really becoming an honest-to-goodness part of a group because what they need from her is, more often than not, temporary. But Chloe loves being able to play music, and while this isn't the most financially stable of jobs in the industry, she's happy performing and will take what she can get. Unfortunately, luck hasn't been on her side as of late, but just when she thought her dream was coming to an end, her saving grace comes in the form of Reid Ryder. An indie rocker, Reid is in dire need of a violinist to fill in for the duration of his upcoming tour. Both he and Chloe have a lot riding on the success of this tour, and the last thing either of them needs are complications. Constantly in each other's company, Reid and Chloe's feelings are teetering over a line that should not be crossed--one where they can never come back from. Will Reid choose to remain in his heart's status quo or will he take a risk and fall again?

It's taken me a few days to try and get my thoughts and feelings together before writing this review. When I first decided to read and review Brooklyn & Beane, which also serves as my introduction to Olivia Evans's writing, I'd based that decision on the blurb. Now, usually when I'm faced with a new-to-me author, I check out Goodreads to have an idea what other readers and bloggers think about them and their work. There are times, however, where I choose to just jump in and wade through the story on my own. Welp, color me taken aback when I realized that Reid was in a long-term committed relationship with his girlfriend, Jess. Now, for the record, cheating isn't a hard limit for me. Heck, I've read a lot of books where some form of cheating occurred. I just wasn't a fan of the blurb not mentioning the all-important bit of Reid being with Jess while highlighting his burgeoning romance with Chloe.

More importantly, however, was that I wasn't a fan of Reid's for nearly most of the book. Yes, he had his demons, and I would never hold that against anyone, but it was his treatment of both Jess and Chloe that bothered me most. The guy didn't deserve either of them, and his taking what felt like forever to make up his mind about who between the two women he would choose was unfair to them. Instead of being about delayed gratification, this was simply delayed resolution. Don't get me wrong--Olivia Evans can write and she does it rather well. She didn't rush the story, allowing the relationship between Reid and Chloe to develop, in turn, making me want to root for them. But again, this is where the whole issue of his being with a girlfriend and his prevalent selfish behavior tips the scales for me. Weighing all factors, I'm going to give Brooklyn & Beale three stars. That may not seem all that high, but on a far more positive note, Evans is an author who has talent and it's clear that she's impressed a lot of readers with her work. I'm really hoping to check out her past and future books because she's undoubtedly good. ♥