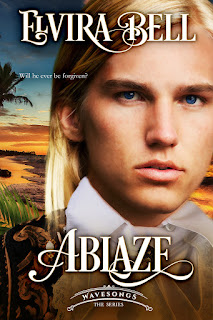 Elvira Bell closes out her debut series, Wavesongs, with the third novel, Ablaze. Please note that the three books must be read in order: Astray, Forlorn, and Ablaze. The series follows a continuing story arc and has the same main characters throughout, with books two and three ending in cliffhangers. Simply put: You cannot jump into the series with the second or third book or else the story won't make as much sense as it's supposed to. These are rather length reads, so might I suggest that if you do plan on binge-reading, to do so over a long holiday weekend.

Ablaze picks up where Forlorn left off, and we find Nick Andrews back in the Caribbean. He desperately wants nothing more than to make his way back to Christopher Hart, the man he thought he'd lost but has somehow returned. But Tom Arlington is keeping an overly watchful eye on his valet, and when his jealousies and obsession become destructive, it goes past the point of understanding and forgiveness. What will be left of Nick and Christopher when they're finally able to be together again, and will they be able to overcome the scars left by Tom?

This was a satisfactory end to the Wavesongs trilogy, bouncing back well from the second book, which faltered quite a bit compared to the series starter. Not only was this book about Chris and Nick finding their way back to each other, but it was also claiming what was rightfully theirs and making a life together. But nothing comes easily, and they had quite a few hurdles to get through before finally--FINALLY!--getting to their much deserved happily-ever-after. I'm giving Ablaze four stars, and with all three ratings taken into consideration, the series gets the same. ♥

Read my reviews for the Wavesongs series: