Review: Different as Night and Day by Leigh Lennon (Father/Son #1) 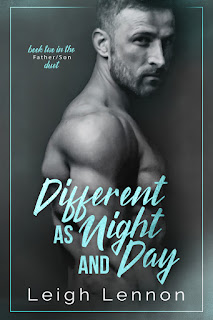 Oh my. I hate writing reviews like this. It makes me feel crappy. Let me just say, though, that I make the greatest effort to highlight the positives in any book I read, even when they fall short of my hopes and expectations. In the case of Different as Night and Day, though, I really struggled. The first Father/Son book didn't go as I had hoped, but I went into this second one with a sense of optimism. Unfortunately, it fell even deeper into the same rabbit hole as Like Father Like Son, making for the sort of read that had me wishing Maguire Parrish, the duet's male main character, ended up with any woman other than his son's pregnant widow, i.e. Maguire's daughter-in-law, Holland.

My main issue with book one was the lack of chemistry between Maguire and Holland, and I still didn't feel much of a connection between these two in book two. However, my biggest issue here is my utter dislike for Holland. One of the things I look for in the books I read is to see how a character evolves throughout, but in the case of Holland, it felt more like she devolved. Sure, she was young and had lost her husband and now had a baby to take care of, but she also happened to have Maguire, a man who went above and beyond for her, and she repaid his love and care with an attitude that screamed ungrateful and selfish. The man deserved so much more than what she was throwing his way, and he was truly the lone bright light to this book. The epilogue was the happily-ever-after that a lot of romance readers like, but because of everything that led up to that point, it came off as more coyingly saccharine than joyful and sweet. As much as it pains me, I'm giving Different as Night and Day two stars. ♥

Read my reviews for the Father/Son series:

Purchase Different as Night and Day on Amazon.