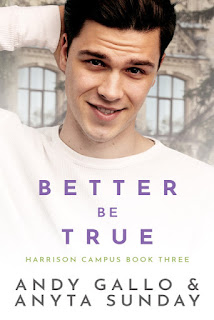 Third time's the charm for the Harrison Campus series! I liked the first book, loved the second one, and the third novel is the one I absolutely adored! After reading four books that they've penned together, Andy Gallo and Anyta Sunday have easily become one of my favorite writing duos. It's difficult who writes which parts, which basically means that their partnership is quite seamless and they seem in tune with one another. I'm not sure if book three is the end of the series, but if it is, it's certainly ending on one heck of a high note with a story of unlikely roommates who become fake boyfriends. Both know what heartbreak feels like, but there's no risk of that since their relationship is all for sure--to appease family. Then, why does it feel real?

Lucas DeRosa is in need of a roommate now that his cheater of an ex-boyfriend has messed up their plans of rooming together while interning in an accounting firm in Philadelphia. Lucky for him, he finds one at the very last minute, but Nico Amato is nothing like he quite expected. Nico is desperate for a place to stay in Philly while helping his sister plan her dream wedding--desperate enough that he's willing to pretend he doesn't have the hots for his new roommate. The two end up becoming friends--the sort of friends that agree to become each other's fake boyfriend, whether it be to make an ex jealous or to appease nosy relatives. No harm, no foul, right? After all, they aren't each other's type. Nico's too flamboyant, and Luke is too boring. Right?

As individuals, Nico and Luke had depth and captured my interest from the moment they made their first appearances on the page. Then there was that unforgettable first crossing of paths, and the realization of who the other one was once they formally met! As a couple, these two captured more than my attention--they snagged my heart, and I couldn't help but become emotionally invested in their happily-ever-after as they stumbled and fumbled their way towards said HEA. The whole fake relationship trope isn't one of my top favorites, but Andy Gallo and Anyta Sunday have written this irresistibly sweet and fun story that enticed a satisfied smile on my face and if my heart could sigh happily, it would have. Five stars go to Better Be True.

Read my reviews for the Harrison Campus series:

Better Be Sure (book one) - four stars - My Review

Purchase Better Be True on Amazon.