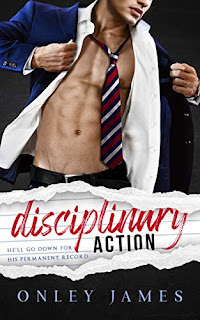 I think it's fair to say that Onley James has become one of my go-to M/M romance authors over the span of four novels and in less than a year's time. She's just released a brand-new standalone that employs a dash of taboo with a hint of kink. Okay, okay. Not really a dash nor a hint; think more thrumming with both but never in a way that felt gratuitous. Disciplinary Action is the story of Callum Whyte, a nineteen-year-old high school senior who finds himself a pariah in his private school, no thanks to his father's white collar crimes. He's ostracized not only by most of his peers but members of the school's administration. Now on the wrong side of the tracks, he's forced to earn money any way he can, which is why he takes up his best friend's offer to sleep with an older man with a Daddy kink, he agrees. That night changes both Cal and the man he calls "Daddy"--forty-three-year-old Leopold Gideon--but Gideon never sleeps with the same boy more than once, and both go their separate ways...that is, until Cal catches sight of his school's interim headmaster, and he looks more than familiar. He looks just like Daddy.

I loved this book, and it's not because I necessarily have a thing for kink in the romance novels I read. If anything, what I do have a thing for is Onley James's storytelling. Here, she's given readers two main characters who are starved for something that they never received from the people who were supposed to protect them most--Gideon his late husband and Cal his father. It was interesting to see how their relationship developed, particularly with how everything began and with Cal deciding to blackmail Gideon once he realized the position of power they both held. Cal wasn't looking for a father figure, but what he needed was someone who actually cared about his welfare. As for Gideon, his back story was far more complex than I'd anticipated, as was what happens once these two get together. Talk about gobsmacked! I certainly didn't see certain outcomes here, but goodness, how the author did an awesome job weaving it all into this tale that touches upon some of the more recent headlines. I tip my hat to James for keeping me on my proverbial toes with this one. Disciplinary Action deservedly gets five stars. 🖤