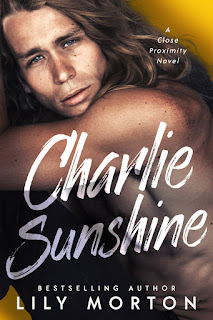 Ah, a Lily Morton read hits the spot (and no, I don't mean that in a dirty way!), making for a wonderfully sweet and sexy end to what has been a rather trying week for me. With her patented mix of heart and humor, Morton more than tickles my fancy (again, not meant in any way, shape, or form as naughty!), and with the much awaited release of the second book in her Close Proximity series, I got that bit of sunshine (pun intended) post-dreariness. While the books are part of one series and have certain ties due to recurring characters who are all friends, both Best Man and Charlie Sunshine, books one and two, respectively, can be perused and enjoyed as total standalones.

Charlie Sunshine is the story of two twenty-seven-year-old best friends who have known each other since they were children who unexpectedly find themselves aware of one another in a totally non-platonic way once they start living together. Charlie Burroughs is a librarian with a sunny personality who can't seem to find someone to share his life with. He wants to be seen for more than his good looks and his epilepsy. Outside of his family, the one person who loves and accepts him wholeheartedly is his best friend, Mikhail Lebedinsky. For all of Charlie's effervescence, Misha is stoic in the face of responsibilities to his family and snarky when it comes to others, yet these two get each other like no one else ever could. Will sharing a flat shine new light on their close relationship?

I quite adored reading Charlie and Misha's story. There was very little in terms of drama, with more of a pinch of angst added, just enough to satisfy even an angst addict like me. The wit and humor that I've come to recognize as Lily Morton's signature style was ever-present and that delicious slow burn was at play. The inklings are there that Charlie and Misha are beginning to see each other as more than friends, but nothing is rushed nor over-hyped, allowing instead this almost tantalizing tease that made for a more enticing read as far as I was concerned. I also loved seeing how these two were with their respective families and combined group of friends, making it clear that they had strong support systems. I suspect I already know who book three will be about, but I also hope one other supporting character gets his own story told later on. Charlie Sunshine was my five-starred bit of reading goodness. ♥

Read my reviews for the Close Proximity series: