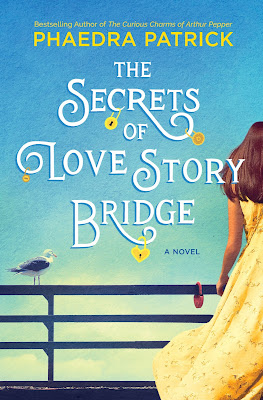 It’s summer in the city and passions are soaring along with the temperature—for everyone but Mitchell Fisher, who hates all things romance. He relishes his job cutting off the padlocks that couples fasten to the famous “love story” bridge. Only his young daughter, Poppy, knows that behind his prickly veneer, Mitchell still grieves the loss of her mother.

Then one hot day, everything changes when Mitchell courageously rescues a woman who falls from the bridge into the river. He’s surprised to feel an unexpected connection to her, but she disappears before he can ask her name. Desperate to find out her identity, Mitchell is shocked to learn she’s been missing for almost a year. He teams up with her spirited sister, Liza, on a quest to find her again. However, she’s left only one clue behind—a message on the padlock she hung on the bridge.

Brimming with Phaedra Patrick’s signature charm and a sparkling cast of characters, The Secrets of Love Story Bridge follows one man’s journey to unlock his heart and discover new beginnings in the unlikeliest places.

Add The Secrets of Love Story Bridge on Goodreads.

As he did often, over the past three years, Mitchell Fisher wrote a letter he would never send.

He sat up in bed at midnight and kicked off his sheets. Even though all the internal doors in his apartment were open, the sticky July heat still felt like a shroud clinging to his body. His nine-year-old daughter Poppy thrashed restlessly in her sleep, in the bedroom opposite.

Mitchell turned on his bedside lamp, squinting against the yellow light, and took out a pad of Basildon Bond notepaper from underneath his bed. He always used a fountain pen to write—old-fashioned he supposed, but he was a man who valued things that were well-constructed and long-lasting.

Mitchell tapped the pen against his bottom lip. He knew what he wanted to say, but by the time his words of sorrow and regret travelled from his brain to his fingertips, they were only fragments of what he longed to express.

As he started to write, the sound of the metal nib scratching against paper helped him block out the city street noise that hummed below his apartment.

Dearest Anita
Another letter from me. Everything here is fine, ticking along. Poppy is doing well. The school holidays start soon and I thought she’d be more excited. It’s probably because you’re not here to enjoy them with us.
I’ve taken two weeks off work to spend with her, and have a full itinerary planned for us—badminton, tennis, library visits, cooking, walking, the park, swimming, museums, cooking, a tour of the city bridges, and more. It will keep us busy. Keep our minds off you.
You’ll be amazed how much she’s grown, must be almost your height by now. I tell her how proud I am of her, but it always means more coming from you.
Mitchell paused, resting his hand against the pad of paper. He had to tell her how he felt.
Every time I look at our daughter, I think of you. I wish I could hold you again, and tell you I’m truly sorry.
Yours, always
Mitchell x


He read his words, always dissatisfied with them, never able to convey the magnitude of grief and guilt he felt. After folding the piece of paper once, he sealed it into a crisp, cream envelope, then squeezed it into the almost-full drawer of his nightstand, amongst all the other letters he’d written. His eyes fell upon the slim lilac envelope he kept on top, the one addressed to him from Anita, that he’d not yet been able to bring himself to open.

Taking that envelope out, he held it under his nose and inhaled. There was still a slight scent of her on the paper, he thought, of violet soap. His finger followed the angle of the gummed flap and then stopped. He closed his eyes and willed himself to open the letter, but his fingernails dented crescents into the paper.

Once more, he placed it back into his drawer.

Mitchell lay down and hugged himself, imagining Anita’s arms were wrapped around him. But, when he closed his eyes, the words from all the letters weighed down upon him like a bulldozer. As he turned and tried to sleep, he pulled the pillow over his head to force them away. 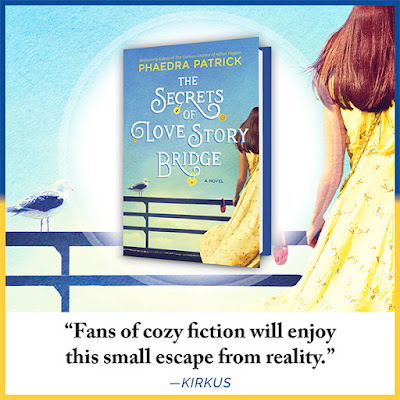 Phaedra Patrick is the author of The Library of Lost and Found, Rise and Shine, Benedict Stone and The Curious Charms of Arthur Pepper, which has been published in over twenty countries around the world. She studied art and marketing, and has worked as a stained-glass artist, film festival organizer and communications manager.

An award-winning short story writer, she now writes full-time. She lives in Saddleworth, UK with her husband and son.