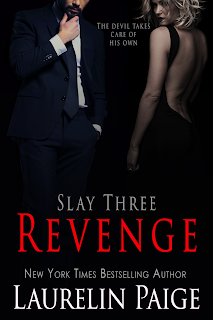 If there's one thing I've learned when it comes to the series that Laurelin Paige writes, it's that just when you think that she couldn't possibly one-up herself, she does exactly that. Naturally, that's a win-win for readers and fans, and seriously, this Slay quartet is, indeed, slaying whatever came before it. We're now in book three, and Revenge finds main characters Edward and Celia Fasbender warming to their roles as husband and wife. What may have begun as using their families' rivalry as a means to ruin each other has become an honest-to-goodness relationship--one that neither Edward nor Celia believed possible, but is now what matters most to both of them. Edward is still very much out for revenge, but now, his adversary has become his partner, and vengeance is theirs.

Edward and Celia Fasbender are giving Hudson and Alayna Pierce a run for their money. Both couples are multi-layered and highly complex, with all four of them having rather dark periods in their lives. In Edward and Celia's case, it almost feels as if the shadows that follow them are more like specters, haunting them incessantly. They're dealing with a cache of hurt and anger, and there's still a lot of tension between them, which is why the fight to stay in control and to let go is like a game with these two, only now, no one loses. Now, it goes without saying that this ends in a cliffhanger since, hello, there are four books in this series. The minute I got to the end of Revenge, I found myself feeling antsy, because there was going to be a wait for the fourth and final book and I'm not exactly the most patient people. However, wait I shall and I'm sure Laurelin Paige will make it oh-so-worthwhile. Five stars! ♥

Read my reviews for the Slay series: