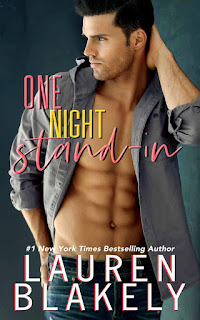 Gah! I can't believe we're already at the third and final full-length novel in Lauren Blakely's Boyfriend Material series. It's been such a fun ride, and I'm going to miss the three couples that have found their happily-ever-afters. But I'm getting ahead of myself. Let me tell you a bit about One Night Stand-In. About a decade ago, Lola Dumont and Lucas Xavier met in college and became not just fast friends but the best of friends. Then they shared one kiss--a kiss that they both knew was a game changer. But when Lucas failed to show up for their first date and offered no word of apology when Lola finally saw him, any hope of them becoming more than friends withered and died. To make matters worse, instead of going back to being friends, Lola and Lucas became rivals that pushed each other's buttons over the next ten years. But when Lola's younger sister, Luna, and Lucas's younger brother, Rowan--who also happen to be a couple--ask them to participate in a scavenger hunt to retrieve important possessions their landlord has scattered around the city, will it be the chance for Lola and Lucas to be friends...or more... again?

Okay, can I start this part off by saying how much I appreciated the direction that Lauren Blakely took with Lola and Lucas's story?! There wasn't this drawn-out, push-and-pull sort of scenario that went on, and I, for one, appreciated that. Lola and Lucas clicked, but there was ten-year-old baggage that they had to deal with, no thanks to their lack of communication and with their hurt feelings getting the better of them all those years ago. Also, they were twenty-one at the time, and with them now being both thirty, I guess they were able to take a step back and be more contemplative. The whole idea of the scavenger hunt and the hilarious landlord that was Harrison who was behind it was genius. He wasn't a mere supporting character here because the guy really was the who one who had orchestrated it. Why he did what he did is something you're going to have to find out on your own because I refuse to spoil that part for readers. Now, while this may be the last full-length story in the series, Blakely did announce that there's a novella coming which wraps up the series. Yipee! One Night Stand-In snags five stars. ♥

Read my reviews for the Boyfriend Material series:

Asking for a Friend (book one) - fives stars - My Review