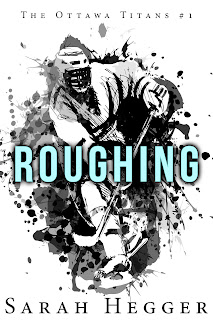 Roughing is the first novel in the new Ottawa Titans hockey romance series from Sarah Hegger. This enemies-to-lovers story is about Elizabeth Rogers and Sam Smith, whose mothers may be the closest of friends but that sort of kinship is the complete opposite of what Elizabeth and Sam have. She's the girl who can't say "no" to anyone, always trying to keep the peace and refusing to rock the boat, especially when it came to her family. He's the guy considered to be one of the most talented players in professional hockey, but along with that talent came a temper. When Sam ends up suspended for twenty games after breaking the jaw of a player on an opposing team, he knows it's time to give his image some spit and shine, and who better to help him than Elizabeth? It would be easy to convince her to agree since everyone knows she isn't the type to refuse anyone needing her help...even if it happens to be someone like Sam. They'll have to make a real effort to play nice, but could all the time they spend together lead to something that neither could've expected. This time around, though, will Elizabeth still say "yes"?

While a wee bit longer than I felt it should have been, this series got off to a great start with Elizabeth and Sam's romance. There was no love lost between these two, and I actually liked that they didn't hold back when they went at each other. It helped give me a better appreciation for how they transitioned from two people who couldn't stand one another to actually developing a friendship and then becoming much more. Aside from the romance angle between Elizabeth and Sam, another story angle that captured my interest was Elizabeth's family and how she was somehow relegated to being the one who was the peacemaker, someone who just nodded and agreed to anything and everything, no matter how much you could tell she wanted to refuse. I seriously wanted to smack her father upside the head because the man did not deserve to have the women in his life--Elizabeth, her sister, and their mom--and should have been put in his place or left behind by all three of them years earlier. Overall, Roughing was a truly good read and has me looking forward to even more from the Ottawa Titans series. 4.5 stars. ♥