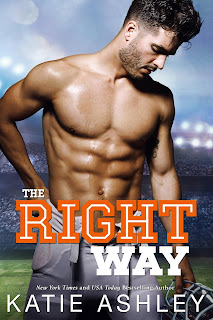 The Right Way is the companion novel to Katie Ashley's 2016 release, The Hard Way, but both books can be read independently of each other, which I feel pretty confident saying since I've read both. It's been quite a while since I last read a Katie Ashley story, so I was happy to have the opportunity to get re-acquainted with her writing, which I've enjoyed several times over in the past. This newest release of hers--and her first for the new year!--had its heartrending and heartwarming moments, with a story about a pregnant teenager who finds herself becoming part of the family of the boy who got her pregnant but passed away soon after he learned he was going to be a father, and how his older brother comes to terms with the presence of this girl who stirs up conflicting emotions.

Finding out she was pregnant at eighteen was a game changer for Presley Patterson, but when Jake Nelson, the father of her unborn child, is suddenly killed in an accident, Presley's life is forever changed in ways she never saw coming. She's taken in by Jake's parents and is welcomed by Jake's eldest brother, Jason. However, it's the other brother who doesn't seem all that thrilled over the fact that Presley is now living in their family home. Twenty-year-old Jonathan doesn't trust Presley, but he's also being weighed down by his own feelings of guilt. He was there when Jake died, and that night haunts him, affecting his performance on the field. It's easier blaming the girl who was never really his brother's girlfriend, but Jonathan is surprised by how easily his opinion of her is changing.

Okay, full disclosure: I wasn't a fan of The Hard Way, which I read when it was published more than three years ago. So, I my excitement over reading something by Katie Ashley again was a wee bit tempered because of my less than stellar experience with Cade Hall and Avery Prescott's story. However, I'm happy to say that Jonathan Nelson and Presley Patterson's story was a step above. I loved the angst and the sprinkling of biting humor throughout The Right Way. It didn't feel as if the chemistry between the main characters was forced, although there were times where it was as if we skipped certain events leading to the two getting closer. The romance, though, is second to the aspect of family and how Jonathan, Presley, and those who loved Jake came together for baby Evie. Four stars. ♥

Purchase The Right Way on Amazon.