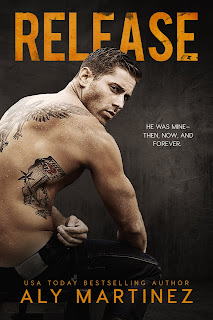 We're only a handful of days into the New Year and it's gotten off to a really awesome start with a couple of wonderfully written books, one of which just happens to be Aly Martinez's newest release, which just happens to be titled Release. This is a friends-to-lovers slash second-chance romance with a whole lot of angst. Althea Hull and Ramsey Stewart became best friends as children and fallen in love as teenagers. When Thea is assaulted, Ramsey is arrested and later convicted for the murder of her assailant. He's put in prison and cuts ties with Thea soon after, making it clear that she should start a new life--one that did not include him, especially considering he no longer loved her. But Thea held on, and twelve years after she'd last seen him, the time had finally come for Ramsey's to be released on probation. The boy she lost is now a man, and while it looked as if his heart remained imprisoned within the self-imposed walls he had created, Thea knew one thing: Ramsey was hers and she was his. For always.

This is one of those books that had a whole lot of expectation behind it. Aly Martinez is, after all, an author who has a well-earned reputation for writing angsty stories with a lot of heart. So yes, I went into Release with very lofty expectations, thanks to my personal experience with Martinez's writing. Thankfully, she's repaid my faith in her with a story about love, sacrifice, patience, and forgiveness. Thea truly was the star of this book. Yeah, yeah. It's a hot guy on the cover, but at the very heart of the story was a woman, one who had a whole lot of fortitude and courage. Amidst the secrets that were kept from her and the fact that the guy she loved was actively pushing her away, Thea didn't buckle from everything that weighed on her. Heck, she lived! I loved that she wasn't wasting away while Ramsey was incarcerated. Yes, she loved him and him alone, but she also created a good life for herself--a life that she knew with all her heart she was going to share with Ramsey once he was released. Martinez, indeed, put together a good story, although I confess that there were times wherein I was sorely tempted to smack Ramsey upside the head. Martinez has shown again she has a way with words and we reap the rewards. Five stars. ♥