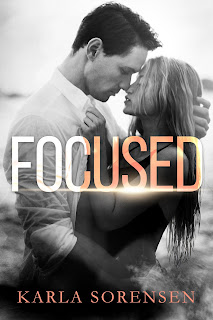 Karla Sorensen returns with the first book in her new spin-off series! If you've read The Marriage Effect, the third novel in the author's Washington Wolves series, then you'll remember Logan Ward, the professional football player who was a guardian to his four younger sisters. He got his happily-ever-after with Paige McKinney, and with this spin-off, it looks like the rest of his family will be getting their own happy endings as well. It kicks off with Molly Ward, who works with the Washington Wolves but finds herself with a new boss after her old one--Ava Baker from The Ex Effect, book two in the Washington Wolves series--moves away. Molly's new boss doesn't seem all that confident in Molly's qualifications but offers her a challenge. Molly knows she has a lot to prove and refuses to have anything or anyone stand in her way. But then the latest addition to the Wolves' roster comes along, and it turns out that Noah Griffin is going to be the star of the project she's in charge and he wants nothing to do with her. The tension between them builds and sparks something they try to resist, but when they give in, will it spell the end to everything they've been trying so hard to create for their respective careers? Is a future even possible?

This was a strong start to a new series, with a really good story about two people who were forced into each other's company and had no love lost, which didn't make it an easier to pretend that there wasn't an underlying thrum of something more. Of course, maybe that has to do with the history between them. Even with there being ten years since they'd last seen one another, it was obvious that Molly and Noah still had that draw that lingers in spite of time and distance. I loved the lighthearted feel of their story with a pinch of angst thrown in for good measure. The romance was great as was the family dynamics. Bonus points for the cameo appearances of characters from the Washington Wolves series! Focused was a fantastic beginning to this spin-off series. 4.5 stars. ♥